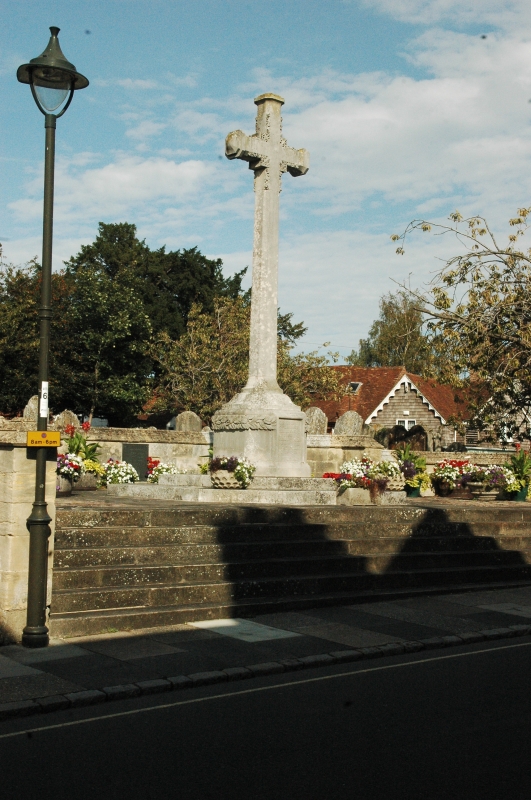 The war memorial stands in a prominent location by the churchyard of the Church of St Mary the Virgin on Church Street in Petworth. The memorial is set within a paved stone enclosure formed by low walls and accessed by five steps. The memorial comprises a tall Portland stone latin cross with decorative mouldings in the juncture of the cross piece and shaft. It is set on a Portland stone octagonal plinth on a two-stepped base. On the plinth are further decorative carved mouldings in a foliate design. On the south face the inscription reads: IN PROUD AND/ PERPETUAL/ REMEMBRANCE/ OF THE MEN OF/ PETWORTH WHO/ FOUGHT IN THE/ GREAT WAR/ 1914-1918/ LEST WE FORGET.

A bronze plaque was later fixed to the enclosure wall and is inscribed with: THIS TABLET/ COMMEMORATES/ THE MEN, WOMEN/ AND CHILDREN/ OF THIS PARISH/ WHO DIED IN THE/ WAR/ 1939-1945.

The aftermath of the First World War saw the biggest single wave of public commemoration ever with tens of thousands of memorials erected across England. In 1919 a War Memorial Committee, under the chairmanship of Lord Leconfield of Petworth House, was formed to consider how best to commemorate those men of Petworth who gave their lives in the First World War. The Leconfield Estate Agent, J B Watson, wrote to Chichester Diocesan Architect, H P Burke-Downing, with a diagram of land attached to the churchyard described as ‘one of the sites’ proposed for the war memorial. This was the site that was eventually chosen. About £450 was raised by public subscription and the architect Herbert Bryant was appointed.

In July 1920 he wrote suggesting the steps up from the pavement should be of Purbeck stone, as being cheaper and equally as suitable as York stone, with the steps of the monument itself to be of Portland stone. He also sent a rough sketch of the platform area with a cross-shaped paving of York stone and large L-shaped cobbled areas in each corner, presumably also as a cost-cutting measure. However the final working drawings show a more extensive area of paving with a square set either side for grass or flower beds. In the event these areas were, and still are, filled with cobbles.

The Parish Magazine of December 1920 reported that the cross of Portland stone was paid for by public subscription and that all other costs were met by Lord Leconfield. In addition the Parish Magazine records details of a meeting of the Committee which agreed to provide a tablet in the church in commemoration of those who have fallen, together with a vellum book containing the names of the same, to be kept within the precinct of the building. There are 75 men listed by name, rank and unit in a book in the church.

The unveiling took place on Sunday 14 November; the memorial, draped in a Union Flag, was unveiled by Lord Leconfield in the presence of a huge crowd. The previous Rector, the Rev John Penrose, performed the service of dedication in the presence of the Rector, the Rev Valentine Powell, other local clergy and dignitaries. A postcard survives which shows the dedication ceremony with the gathered crowd.

A bronze plaque was added to the wall of the memorial’s enclosure commemorating those who lost their lives in the Second World War. Another bronze plaque dating to after 2010 commemorates John Grimwood MBE who had sounded the last post on Remembrance Sundays.

The memorial was recently cleaned and part of the collapsed enclosure wall repaired by the Town Council.

Petworth war memorial, unveiled on 14 November 1920, is listed at Grade II for the following principal reasons:
* Historic interest: as an eloquent witness to the tragic impact of world events on this community, and the sacrifices it has made in the conflicts of the C20;
* Design: as an elegant Portland stone cross with carved details;
* Group value: with the Grade I listed Church of St Mary the Virgin and the southern gateway to churchyard listed Grade II and Petworth park and garden registered at Grade I.