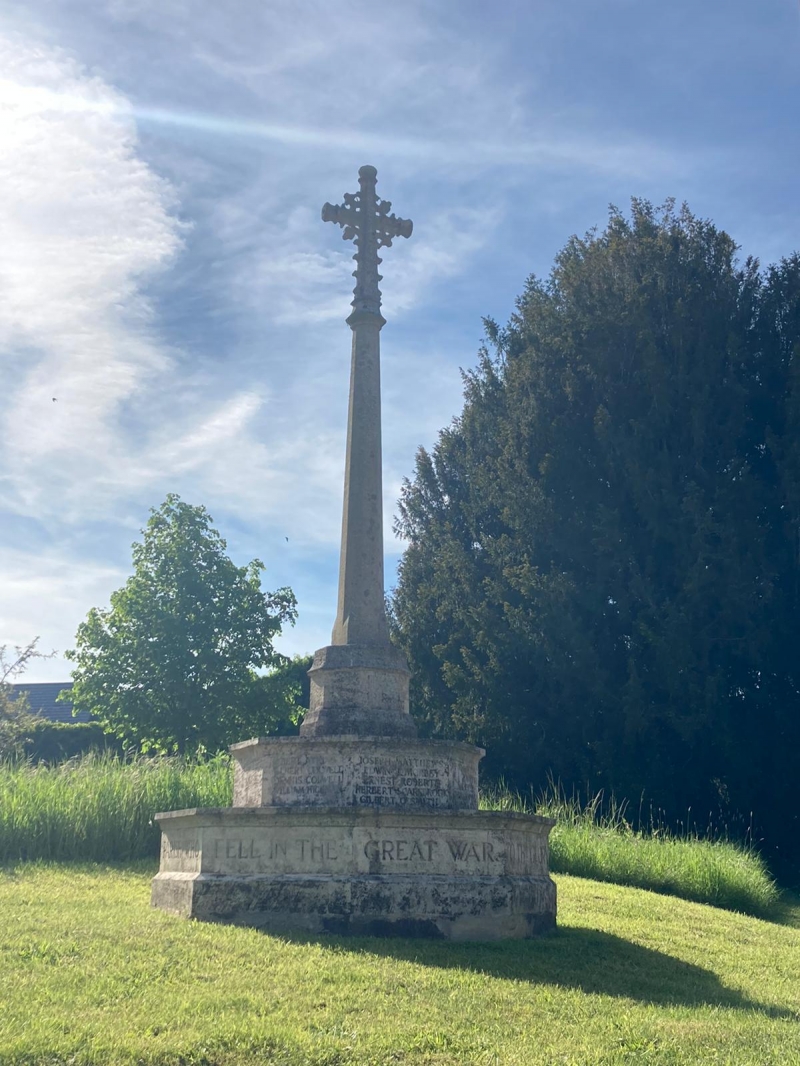 The tall limestone memorial stands in the northern part of the churchyard of the Church of St John the Baptist (Grade I-listed) and overlooking a road junction around which stand a number of other listed buildings. It comprises a Latin cross ornamented with decorative carvings, rising from a tapering, octagonal shaft. The broached foot of the cross shaft rises from an octagonal plinth, set on a two-stage, octagonal base.

An inscription around the lower stage of the base reads TO THE GLORY/ OF GOD AND/ IN MEMORY/ OF THOSE/ FROM THIS/ PARISH WHO/ FELL IN THE/ GREAT WAR/ 1914 – 1918. The names of those who died in the First World War are recorded on the upper stage.

In addition, an inscription on one face of the upper stage of the base reads 1939 – 1945, with the name of a serviceman who died in the Second World War recorded beneath. All inscriptions are incised.

This List entry has been amended to add the source for War Memorials Online. This source was not used in the compilation of this List entry but is added here as a guide for further reading, 11 January 2017.

Stanton St John War Memorial was designed by Thomas Rayson FRIBA, and dedicated at a ceremony on 27 March 1921. Following the end of the Second World War an inscription was added to the base commemorating those who fell in that conflict. The cross was repaired in 1990 following storm damage, and renovated in 2014.

Thomas Rayson (1888-1976). Articled to Robert Curwen, Thomas Rayson studied architecture under Professor Pite at Brixton School of Building. In 1910 he moved to Oxford to be an Assistant in the practice of NW and GEA Harrison. During the First World War he served as resident engineer at Witney Aerodrome. Rayson set up practice on his own account in 1920, having won the Witney Housing Scheme competition in 1919. He was elected FRIBA in 1927. Best known for his housing, he was responsible for a number of war memorials including those at Witney, Cogges, Oxford City, Woodstock and that on Chester Cathedral Green (Grade II-listed).

Stanton St John War Memorial, situated in the churchyard of the Church of St John the Baptist, is listed at Grade II for the following principal reasons:
* Historic Interest: as an eloquent witness to the tragic impact of world events on the local community, and the sacrifice it made in the conflicts of the C20;
* Architectural Interest: an elegant, well-carved, memorial cross in the medieval style by Thomas Rayson FRIBA;
* Group Value: with the Grade I-listed Church of St John the Baptist and numerous listed buildings in close proximity.