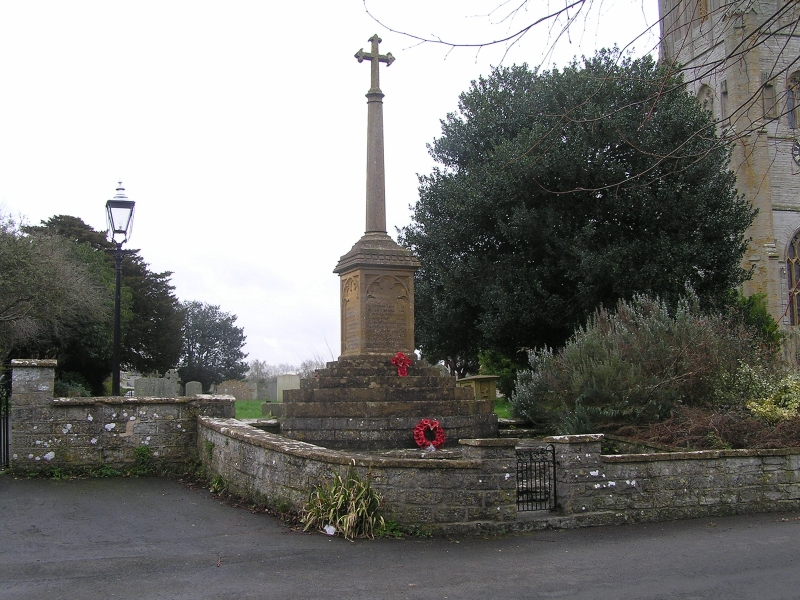 DESCRIPTION: the memorial stands at the edge of the churchyard and is octagonal on plan. It comprises a Latin cross with octagonal arms and shaft rising from a plinth on a six-stepped base. The plinth has a chamfered top and a fretted cornice, and each of its four faces has a trefoil-arched inscription panel. The panel on east face is inscribed: TO THE GLORY/ OF GOD/ IN THANKSGIVING/ FOR VICTORY AND PEACE/ AND TO THE/ HONOURED MEMORY/ OF THE MEN OF/ THIS PARISH WHO FELL/ IN THE GREAT WAR/ 1914-1918; the north and east faces record the names of those who lost their lives. The south face carries the inscription: 1919/ (NAME)/ ERECTED BY/ THE PEOPLE OF/ LONG SUTTON/ 1939-1945/ (NAME).

SUBSIDIARY FEATURES: enclosed by low boundary walls with stone coping, with piers and an iron gate on the west side.

This List entry has been amended to add the source for War Memorials Online. This source was not used in the compilation of this List entry but is added here as a guide for further reading, 23 November 2017.

The aftermath of the First World War saw the biggest single wave of public commemoration ever with tens of thousands of memorials erected across England. One such memorial was erected on the edge of the churchyard in Long Sutton to commemorate the twenty men from the parish who lost their lives during the conflict. A further inscription was added after the Second World War.

Long Sutton War Memorial is listed at Grade II for the following principal reasons:
* Architectural interest: a dignified and well-crafted example;
* Historic interest: as an eloquent witness to the tragic impact of world events on this community, and the sacrifice it made in the conflicts of the C20;
* Group value: with the Grade I listed Holy Trinity Church, which forms its backdrop.