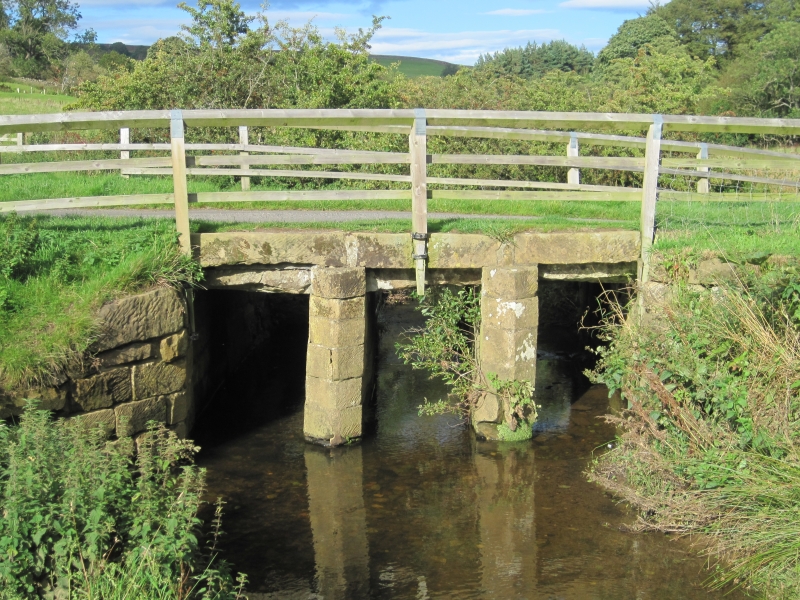 Church of England Parish: Danby with Castleton and Commondale

Clapper bridge with piers of herring-bone-tooled sandstone, probably medieval in origin, rebuilt after the mid C18, possibly circa 1807 when the nearby mill was rebuilt. Strengthened in 2006 with a concealed reinforced concrete deck, this, and the overlying road structure, are not included in the listing.

Clapper bridge, thought to have medieval origins, rebuilt sometime after the mid-C18, possibly circa 1807, and repaired in 2006.

MATERIALS: piers and abutments are of well-dressed herring-bone-tooled sandstone. The original bridge deck is formed from minimally-dressed large sandstone slabs.

FORM: the bridge has two, evenly spaced, tall, thin piers which are pointed towards the south, upstream side, and square ended facing the north, downstream side. The piers and abutments support large slabs forming the original deck; the edges of the deck are formed with dressed sandstone lintels into which are set iron clamps to hold timber fence posts for the fencing that forms the simple parapets to the bridge. The bridge is spanned by a reinforced concrete deck that is concealed and carries the tarmac road surface. Pursuant to s.1(5A) of the Planning (Listed Buildings and Conservation Areas) Act 1990 (‘the Act’) it is declared that the reinforced concrete deck and the overlying structure of the road are not of special architectural or historic interest.

The bridge is thought to be on the medieval route between Castleton and Howe Mill, the water-powered corn mill which served the settlement, being first documented in 1272. The mill was extensively rebuilt in 1807, suggesting the date that the bridge was also rebuilt with piers using herring-bone tooled stonework and reusing large untooled slabs from the earlier, probably medieval bridge for the deck. The herring-bone tooling suggests a rebuilding date sometime from the mid C18 and into the C19. In 2006, following a partial collapse, the bridge was repaired with the insertion of a reinforced concrete deck spanning the bridge, set above the clapper stones. This modern deck is concealed by the tarmac road surface and the flanking grass verges that extend over the bridge.

The clapper bridge, probably with medieval origins and rebuilt circa 1807, which carries Ashfield Road/Wandels Lane across Danby Beck, is listed at Grade II for the following principal reasons:

* Historic Interest: the bridge probably has medieval origins, as it is thought to to be on the route between Castleton and Howe Mill, a mill first documented in 1272;

* Architecture: for the combination of constructed masonry piers and abutments combined with the more primitive use of clapper stones rather than masonry arches.