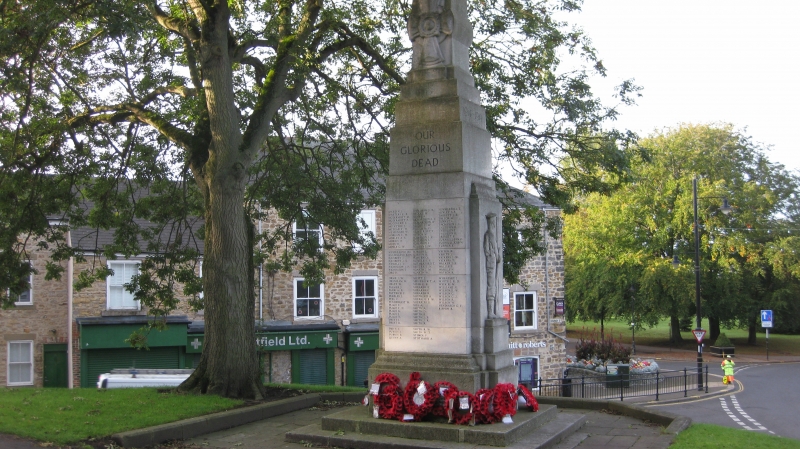 The memorial stands in the south-west corner of the churchyard of the Church of St Michael and All Angels (Grade I). The Portland stone memorial is c6m tall and takes the form of a great pylon. The upper part of the pylon dies back in four stages to an immense wheel-head, similar in form to the cross head of the St Cuthbert cross. The dates 1914 – 1919 are incised on either side of the middle stage below the cross head, with OUR GLORIOUS DEAD to the front and rear of the lower stage. The commemorated names are listed in three columns on the front and rear faces of the pylon.

The figure of a sailor, c1.5m tall, in profile and fully equipped with his hands resting on the muzzle of his grounded rifle, is carved in relief on the north-west face of the pylon. On the south-east face of the pylon this figure is matched by a soldier, also in profile. Fully equipped and wearing his helmet, his rifle is slung over his right shoulder as he walks forward.

The memorial is raised on a platform and chains are slung across the faces of the base, to hold wreaths and floral tributes.

The aftermath of the First World War saw the biggest single wave of public commemoration ever with tens of thousands of memorials erected across England. This was the result of both the huge impact on communities of the loss of three quarters of a million British lives, and also the official policy of not repatriating the dead: therefore the memorials provided the main focus of the grief felt at this great loss. One such memorial was raised at Houghon-le-Spring as a permanent testament to the sacrifice made by the members of the local community who lost their lives in the First World War.

The memorial was unveiled on 7 November 1925 by the Earl of Durham, and dedicated by Reverend R Watson, Vicar of Houghton. It commemorates 236 local servicemen who died in the First World War.The memorial was designed by Francis Doyle-Jones and built by William Kirkpatrick and Co of Manchester, at a cost of £700.

Francis W Doyle-Jones (1873-1938) was an architect and sculptor originally from Hartlepool. He worked first for his father, before studying in Paris and London, and concentrated on portraiture. He designed a number of Boer War memorials including those at Middlesbrough (Grade II), Gateshead (Grade II) and Penrith. His numerous First World War memorials include those in Gravesend, Sutton Coldfield (Grade II), and the ‘Men of Elland’ memorial in West Yorkshire (Grade II).

Houghton-le-Spring War Memorial, which stands in the churchyard of the Church of St Michael and All Angels, is listed at Grade II for the following principal reasons:
* Historic interest: as an eloquent witness to the tragic impact of world events on this local community, and the sacrifice it has made in the First World War;
* Architectural interest: an imposing memorial incorporating the figures of a sailor and soldier, by noted designer and sculptor Francis W Doyle-Jones;
* Degree of Survival: unusually, the memorial has not been adapted for Second World War commemoration, and thus retains its original design intent;
* Group value: with the Grade I-listed Church of St Michael and All Angles, and with the Grade II-listed Arch To West Of Church Of St Michael And All Angels, Formerly Part Of Rectory Lodges.