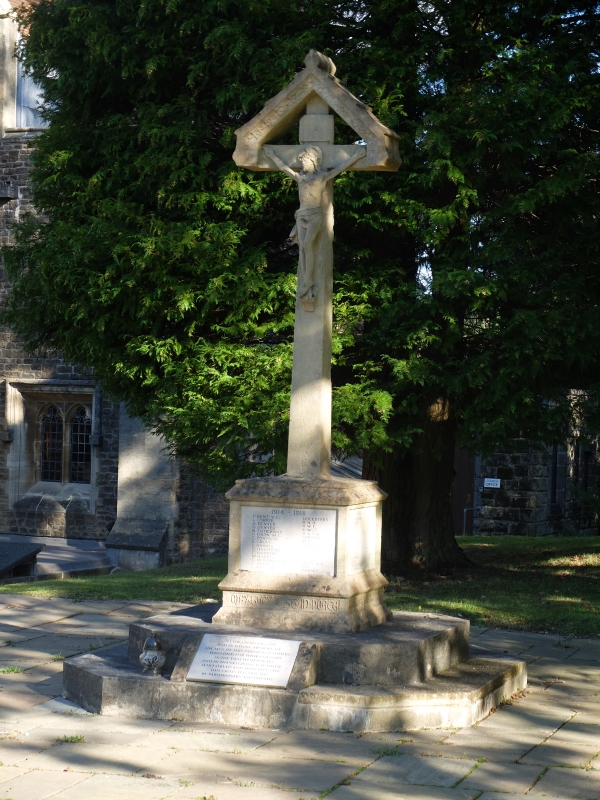 DESCRIPTION: the memorial is a gabled crucifix with a carved figure of Christ on a tapered shaft. The gable is embellished with carved decorative detail and the cross carries the inscription INRI above the figure. The shaft rises from a square plinth which is set upon a two-stepped hexagonal base.

Names of the fallen are recorded on polished plaques set on the front and side faces of the plinth under the date: 1914 - 1918. On two sides of the plinth at the base is carved in ornate lettering: FOR THAT THE PEOPLE/ OFFERED THEMSELVES WILLINGLY.

An angled plaque fixed to the steps carries the dedicatory text which reads: TO THE GLORY OF GOD AND IN LOVING/ MEMORY OF THE MEN OF THIS PARISH/ AND OTHERS WHO DIED FOR THEIR/ COUNTRY IN THE TWO WORLD WARS/ AND IN THANKSGIVING FOR THOSE WHO/ SERVED AND WERE KEPT SAFE THIS/ CROSS WAS ERECTED BY PARISHIONERS/ AND FRIENDS.

A polished plaque on the back of the plinth bears the inscription: 1939 - 1945/ NAMES. Further names are recorded on the side face of the plinth.

Beacon Hill War Memorial was designed by Cecil Greenwood Hare (1875-1932) of Bodley and Hare, Lincoln’s Inn Fields. Hare who specialised in ecclesiastical buildings and church interiors was a pupil of George Frederick Bodley (1827-1907) whom he joined as a partner in 1907. After Bodley's death, Hare continued to work in the Bodleian idiom. In 1916 the practice was commissioned by the London Evening News to produce a design for street shrines to the fallen for the poorer areas of London, the cost of each one executed to be financed from a fund established by the newspaper. In 1920 Hare designed the south chapel (a war memorial) and in 1932 the choir stalls for St Peter’s Church, Ealing. He was also responsible for the design of Castle Donington and Tutbury War Memorials (both listed at Grade II).

Beacon Hill memorial was sculpted by Mr Hitch of Vauxhall, London and it was unveiled and dedicated on 14 December 1919. It commemorates 29 local servicemen who fell during the First World War.

A further 21 names were added following the Second World War for the fallen from that conflict and the inscription was amended to include the words, two world wars.

In 2006 the memorial was conserved with the help of grant aid.

Beacon Hill War Memorial is listed at Grade II for the following principal reasons:
* Historic interest: as an eloquent witness to the tragic impact of world events on this community, and the sacrifices it has made in the conflicts of the C20;
* Architectural interest: an ornate and striking Calvary cross with carved decorative details;
* Designer: by Cecil Greenwood Hare who was known especially for his ecclesiastical work and a 1916 design for street shrines;
* Group value: with the Church of St Alban (Grade II).