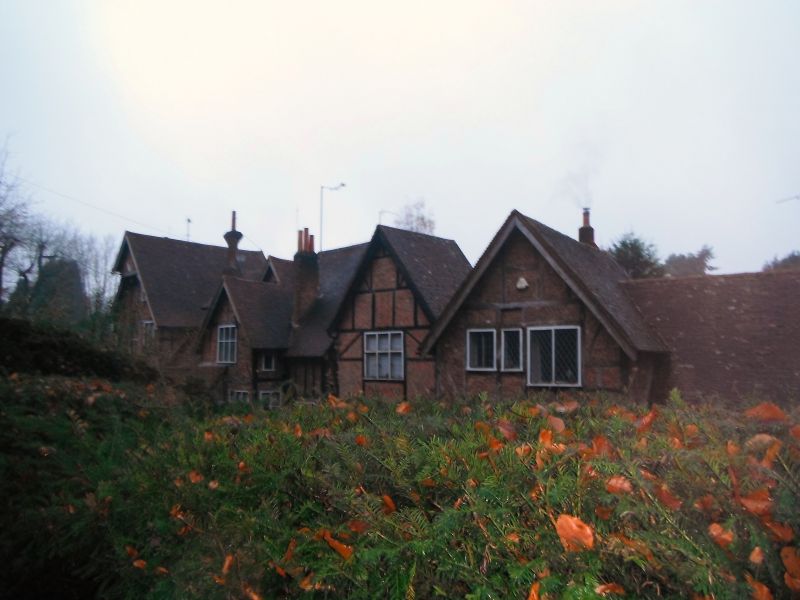 EXTERIOR: Timberframed with curved tension braces and eclectic brick infill panels. The eastern gable, for instance, has herringbone, chevron and curved brick panels all within the same gable. Tiled roof with brick chimneystacks, including an external stack to the west. Entrance or south front of two storeys or two storeys and attics but garden or north front of three to four storeys because of sloping ground. Irregular fenestration, mainly mullioned and transomed casements with leaded lights, some replaced in late C20 in a matching style. South front has three projecting gables including tall western gable with recessed centre and projecting gabled porch supported on wooden piers. North front has two western gables with upper floors projecting on brackets and two projecting bays to the east supported on square brick piers.

INTERIOR: Staircase-hall in no 1 has a 1920s oak well staircase with moulded balusters and square newel posts with acorn finials opening out into a gallery open to the exposed C20 roof with two tiers of purlins and rafters. The hall has C20 oak panelling of C17 plank and muntin type and wooden-bolection-moulded fireplace with brick surround and cast iron firegrate. Western ground floor Drawing Room has an Arts and Crafts style large fireplace recess with C20 stone fireplace and C20 plank and muntin panelling with an overmantel which incorporates seven high quality panels of salvaged C17 or earlier probable Flemish workmanship and two further ones in the wall panelling. The ceiling has some reused beams including a C17 spine beam, others are C20. No 1 also retains two brick fireplaces to bedrooms, two-panelled doors and an attic staircase with turned balusters and square newel posts. No 2 has a large Lounge/Music Room to the eastern ground floor with pine bolection-moulded fireplace, dado-panelling, moulded cornice and six-panelled doors. The adjoining Dining Room has a deep fireplace recess to the north with stone fireplace with brass hood and carved overmantel. The oak panelling, C20 reproduction of plank and muntin panelling, has a series of fine quality figurative panels and two hunting scenes, all probably Flemish in origin and two doors also have a mutule frieze. A plain oak staircase with flat balusters leads to a basement room on a level with the back garden with a brick fireplace with wide hood. An upstairs bathroom retains original tiles, white with blue borders, bath and built-in cupboard.

[Article by Donald Campbell "Blunden Shadbolt 1879-1949 Architect of the House Desirable" in Thirties Society Journal" no 3 1982. ]