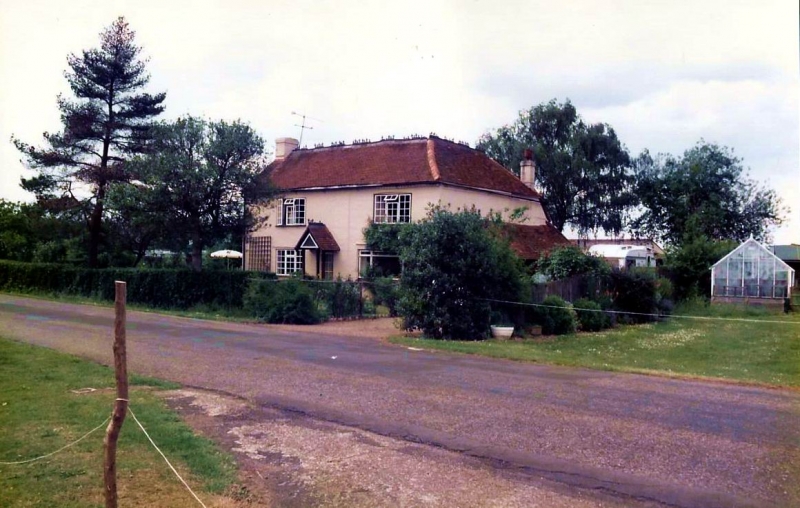 A former farmhouse, now house. The N range is of late C16 or early C17 date. The S range was added in the late C18 or early C19 and a further room on each floor added to the W of the original wing. A NW single storey extension was added soon after 1913.

A former farmhouse, now house. The N range is of late C16 or early C17 date. The S range was added in the late C18 or early C19 and a further room on each floor added to the W of the original wing. A NW single storey extension was added soon after 1913.

MATERIALS: the N range is timber-framed, externally partly re-fronted in brickwork. The S range is of brick in Flemish bond, now painted. Roofs are tiled, gabled to the E and hipped to the W, with three painted brick end chimneystacks.

PLAN: the earlier N range is of two storeys and three bays, comprising a larger heated room and a service room, with two chambers above. It may originally have had a smoke hood on the NE side, replaced by a stone chimneystack in the later C17. The ground floor ceiling was probably raised at this time. The late C18 or early C19 S brick parlour range comprises two rooms on each floor with a large open fireplace in the western ground floor room and straight flight stairs adjoining the eastern wall of the larger ground floor room. At the same time a further room was added adjoining the W side of the earlier wing.

EXTERIOR: the S side, now the entrance front, has a brick dogtooth cornice and two casement windows on each floor. There is a straight joint in the brickwork to the E of the doorcase. The eastern first floor window has an elliptical-headed surround, the others have flat arches. All have C20 casement windows and the eastern ground floor window has been enlarged in the mid C20. There is a central C20 gabled porch supported on wooden posts with a C20 glazed door.

The N part of the E elevation has some exposed timber frame at the corner and a stone rubble chimneystack. The remaining part is of painted brick with a dogtooth cornice. The northern half of the ground floor is concealed by a C19 penticed wooden lean-to with a tiled roof.

The eastern part of the N side has a catslide roofed verandah supported on wooden posts. Above is a hipped dormer. Behind the verandah the original timber-frame is exposed with square panels and curved wind-braces and there is a wide door opening with a plank door. The western part of this side has a projecting catslide roof incorporating an early C20 lean-to addition.

The W side has two parallel ranges of different sizes, both of painted brick, both gabled and with end brick chimneystacks. There is a casement on each floor at the junction of the two ranges and a narrow C20 door in the N range.

The SW ground floor room has two slightly chamfered ceiling beams and an early C19 open fireplace with a wooden bressumer and a built-in wooden seat on the right side of the alcove. The floor has unusually-shaped massive stone slabs. The adjoining room, probably originally a parlour, has a high ceiling with square floor joists and two wide door surrounds.

The straight flight wooden stairs lead to the upper floor. The earlier north wing floor level is lower than the later wing. The NW bedroom contains the external W end wall with queen posts, possibly a blocked original window in the corner, and signs of weathering. The adjoining room, now a bathroom, has the reverse side of the external W wall, exposed N wall frame, an internal partition and original wide elm floorboards. The NE bedroom has an exposed wall frame to both the N and S walls including a blocked wooden mullioned window on the N wall and a panelled wooden plank door with pintle hinges and a wooden latch. There is also a W gable with a tie beam and the lower part of the queen post visible. The roof structure is of clasped purlin construction with two queen struts up to the collar from the tie beam.

The two bedrooms in the later SE wing retain some ledged plank doors.

The N range comprises three bays of a timber-framed house of late C16 or early C17 date, whether originally erected on this site or re-erected here, possibly originally with a smoke hood. A stone chimney was added on the E side in the later C17, possibly at the same time as the ground floor ceiling was heightened; it has a spine beam on a supporting post with a corbel dated 1685.

In the late C18 or early C19 a brick parlour range was added to the S with an open fireplace in the western room. Probably at the same time the original range was extended slightly to the W to provide a further room on each floor. Later a brick outbuilding was added on the western side of the NE side and a timber lean-to shed added on the SE side. The property is shown on the 1813-16 First Edition one inch Ordnance Survey map. After the 1813 Act of Parliament authorising the construction of the Wey and Arun Junction Canal, the canal passed within a few hundred yards of the property. The canal's highest peak of commercial trade was circa 1839 but fell rapidly when the railway line between Guildford and Horsham was opened in 1865.

The property appears to its current extent on the 1871 First Edition 25'' Ordnance Survey map, including an extension on the SE side, but additionally with an extension at the eastern end of the N side, which is no longer present. A number of detached buildings are also shown on the E side on three sides of a yard, which are likely to have been farm buildings. A wooded area is shown very near to the W side of the house.

No change is shown on the Second Edition map of 1897 but on the Third Edition of 1913, the footprint of the house now shows a lean-to extension on the W side; the outline of the farm buildings has not changed. The wooded area has been cleared, an additional small square-shaped building to the N of the house is probably a privy and two additional farm buildings are shown to the N of the earlier ones. At some date after 1913 the farm buildings were demolished and an extension was added to the NW.

In the 1940s the area surrounding Primemeads became an airfield for the Canadian Air Force. During the 1950s and 1960s the property was used for housing Hawker Siddeley's chief test pilots. These included Neville Duke and Bill Bedford. Bedford, a former World War II pilot, later Hawker Aircraft's Chief Test pilot and from 1963-1967 chief test pilot for Hawker Siddeley Aviation at Dunsfold, worked on the development of the Sea Hawk, the Hunter and the P.1127, the Kestrel and the Harrier aircraft, making the first flights of all the last three aircraft. During this time he and his family lived at Primemeads Farm.

In 1980 the property was the subject of a report by Joan Harding of the Domestic Buildings Research Group Surrey (Prime Meads Farm DBRG Report no 2445). For a few years at the end of the C20 the property was unoccupied.

Primemeads, a former farmhouse with a late C16 or early C17 timber-framed N range and late C18 or early C19 S range, is listed at Grade II for the following principal reasons:
* Proportion of survival: the timber-framed N range retains the wall frame to full-height on three sides and part of the fourth, including some blocked original window openings, an internal partition and the roof assembly of clasped purlins and queen struts to the collar beam;
* Interior fittings: include a decorated post dated 1685, open fireplaces, elm floorboards, stone floor slabs and panelled and plank doors;
* Plan: the original plan form of each range is still readable;
* Historic associations: during the 1950s and 1960s the property was used for housing Hawker Siddeley's chief test pilots, including Neville Duke and Bill Bedford, at the time of the development of the Sea Hawk, the Hunter, the P.1127, Kestrel and the Harrier aircraft.