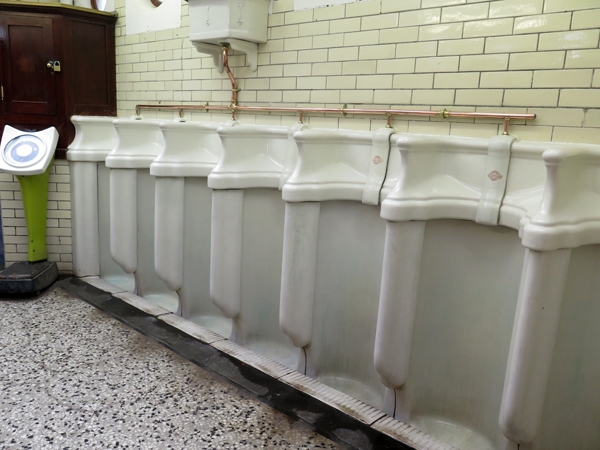 PLAN: rectangular plan with slightly projecting rounded corners.
EXTERIOR: the single-storey public conveniences were built of stretcher-bond brickwork, raised on an ovolo profile, with a plain frieze, moulded cornice and plain parapet. The corners are rounded with side panels and project from the wall face. The end panels to both the E and W elevations have panels with mutules and blind oculi with garlands. The N and S side elevations each have a row of eight timber-framed oculi windows set within reconstituted stone panels, with rectangular recessed spacing panels. The entrance to the gentlemen's toilet has rounded brick reveals with stops and a four-panel timber door, it is situated at the eastern end of the S elevation, with an Art Nouveau style garlanded cartouche above that reads GENTLEMEN. A further four-panel timber door set in a doorway with plain reveals is located centrally beneath the oculi windows of the S elevation. The entrance to the ladies’ toilet, situated at the W end of the N elevation is identical to the gents, apart from the cartouche that reads LADIES and it has two-panel double doors with brass knuckle hinges. The secondary depressed gable roof is hidden by the low parapet wall, it has timber-framed clerestory dead-light windows and gable ends glazed in glass. The slopes of the roof are glazed in clear Corotherm multi-wall polycarbonate panels.

INTERIOR: a central dividing wall splits the interior of the building into two equal halves, with a pair of small walled cubicles used as disabled toilets, to either side of the southern end of the dividing wall and projecting into both the Ladies and Gentlemen’s toilets, but accessed only from the external central door in the S wall. These cubicles are lit both by direct light from a clerestory window and borrowed light from deadlights in the upper section of the cubicle walls from the Ladies and Gentlemen’s toilets. The walls of the toilets are clad in very pale cream tiles, and have black and white terrazzo floors that have a green edging with a black boundary band. Narrow sections of ceiling are formed against the N and S walls by the under-surface of the reinforced concrete roof slab that surrounds the open light well, beneath the glazed roof, which is supported by concrete wall plates and an exposed reinforced concrete king post truss, over the centre of each of the two rooms.

The gentlemen’s toilet is entered through a narrow curving corridor with a two-light attendant’s sash window adjacent to the entrance door. The corridor turns 90 degrees to the W and enters the toilet from the E, flanked to the N by a wash room entered by a four-panel timber door and lit by a nine-pane frosted glass window in a timber surround with cornice, and to the S, by the attendant’s room that has a similar window and is entered by a four panel door with brass fittings; the upper panels of the door are glazed with frosted glass. The timber door frame is integral to the timber screen wall of the three water-closet cubicles that are situated against the S wall, and a moulded timber cornice runs the full length of the screen wall and over the door and window of the attendant's room. The cubicles are entered through plain four-panelled timber doors, which can be closed by toilet lock indicators. The cubicles are divided by tiled walls and each is fitted with white glazed stoneware ‘Kensington’ Combination wash-down pedestal with a modern seat and a three-gallon cistern, mounted on stoneware brackets. A seven-person white glazed stoneware ‘Severn’ urinal range is built against the N wall and is served by two cisterns with small Art Nouveau-style tulip motifs, supported by stoneware brackets and fitted with polished copper and brass pipe work. A waist height timber cupboard with a two-panelled door and brass fittings is raised on an angled glazed tile plinth in the NW corner adjacent, to a secondary Edward Johns and Co Limited, scalloped white and cobalt blue stoneware hand sink that is attached to the dividing W wall.

The ladies toilet is entered by a small entry corridor with pale cream tiled walls and blue tiled bands acting as a skirting and a cornice. A four-pane double side-hinged attendant’s window faces directly out from the S wall and has an illuminated ladies sign above. A pair of timber two-panel double doors, with frosted upper glazed panels, brass finger plates, and moulded architraves in the E wall of the corridor, lead into the toilet room. The S wall of the ladies is lined by five identical timber screened water closet cubicles to those in the gentlemen’s toilet, with a further two cubicles built against the NE corner of the N wall. A suite of three inter-locking white enamelled hand basins, supported on a chamfered and stopped timber frame, are attached to the N wall, between the cubicles and a timber cupboard. The attendant’s room is entered by a four-panel door in the W wall, adjacent to the entrance corridor doors.

Hull City Council posted a notice in the Hull Daily Mail on Monday 15 March 1926 inviting builders to submit tenders for the construction of a new public convenience in Nelson Street. This date of construction is earlier than suggested in the Pevsner Architectural Guide - Hull, which suggests the 1930s. The conveniences were erected on the site of a tram stop, adjacent to the Victoria (Corporation) Pier, which served the Humber ferry crossing to New Holland, replacing an earlier men only cast-iron urinal. The new building was built in an Edwardian style, with Art Nouveau features and detailing and was fitted-out to a high standard, with sanitary fittings supplied by J Duckett and Son Limited, of Burnley. The “Kensington” Combination wash-down pedestals, costing £5 each, and the seven-person “Severn” Urinal Range costing £60, both of which were illustrated in the company’s 1913 sanitary appliances catalogue. It is interesting to note that Hull City Council did not choose the most expensive models in the catalogue, but they did choose the most expensive white ware versions of both the Kensington and Severn models. Facilities were provided both for Ladies and Gentlemen, reflecting changes in the social status of women, with the entrances at opposed corners of the building being supervised by attendants. During the 1990s and the early 2000s, the facilities regularly featured in the Loo of the Year Awards, including winning the Golden Loo Brush of the Year Award.

The Nelson Street public conveniences of 1926 are listed at Grade II for the following principal reasons:

Historic interest:
* Place of women in society: a progressive structure, built at a time when most public conveniences were for gentlemen only, and which illustrates the changing social status of women during the 1920s;
* Degree of survival: the structure is remarkably intact, retaining almost all the original fixtures and fittings, including panelled doors, partitions for the washroom and attendant’s room, the original suite of J Duckett and Sons porcelain lavatory fittings, and tiled interior and terrazzo floor surfaces;
* Group value: the public conveniences benefit from a spatial group value with other Grade II listed buildings; including the former Pilots Office, the former Corporation Pier Station, and the Minerva Hotel.