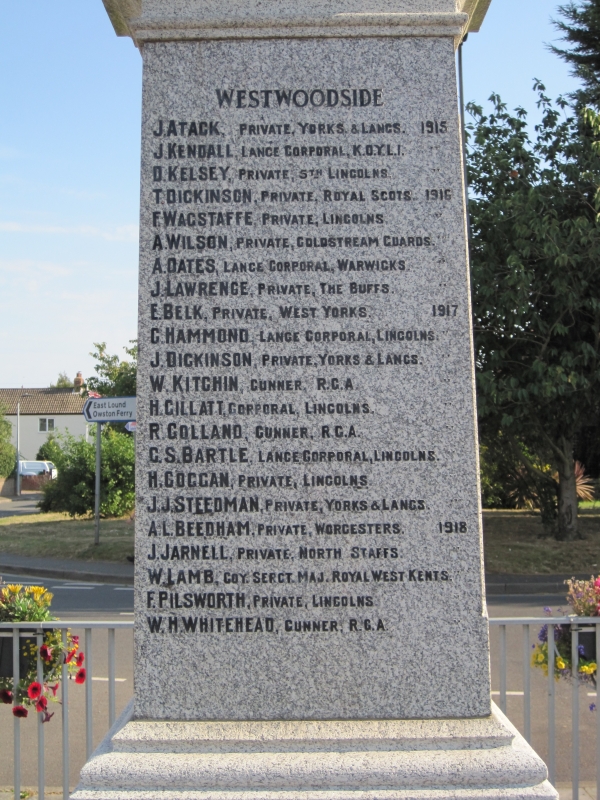 DESCRIPTION: the memorial is sited in the centre of the village of Haxey at the junction of Epworth Road, East Lound Road and Low Street. It depicts the figure of a soldier of the Lincolnshire Regiment with his head bowed and his rifle reversed standing on a rectangular pedestal with moulded cornice. Behind the figure is a carved tree stump. At the top of the pedestal are carved garlands and the front face bears the dates 1914 – 1918 in raised lettering underneath.

Below this on the front face is a raised plaque with the dedication incised in black block lettering: IN HONOUR/ OF THE MEN/ OF THE PARISH OF/ HAXEY/ WHO GAVE THEIR LIVES/ FOR KING AND COUNTRY/ IN THE/ GREAT WAR/ ERECTED BY/ HENRY GILDING JP/ LATE OF THIS PARISH. There is an identical inscription on the rear face. On the remaining sides, one is inscribed: WESTWOODSIDE/ (22 NAMES) and the other: HAXEY/ (21 NAMES).

The pedestal rises from a two-staged plinth and the lower bears the dedication: 1939 – 1945/ (5 NAMES). The memorial stands on a three-stepped base.

SUBSIDIARY FEATURES: the memorial is enclosed by modern metal railings* with stone corner piers; a small gate* allows access to the memorial at the east side.

* Pursuant to s1 (5A) of the Planning (Listed Buildings and Conservation Areas) Act 1990 ('the Act') it is declared that these aforementioned features are not of special or historic interest.

This List entry has been amended to add the source for War Memorials Online. This source was not used in the compilation of this List entry but is added here as a guide for further reading, 3 July 2017.

One such memorial was raised at Haxey and Westwoodside as a permanent testament to the sacrifice made by the 43 members of the local community who lost their lives in the First World War.

Frustrated by previous attempts to build a secular war memorial, Henry Gilding JP born at Haxey saw another opportunity when the old village pond was filled in. His proposal for a memorial was accepted by the Parish Council in November 1927 and Beattie and Co, monumental masons of Carlisle, undertook the project. In February 1928 Gilding travelled to Carlisle to check on progress, but was taken ill with pneumonia on the return journey and died.

It was unveiled on Friday afternoon 13 July 1928 by Lady Charlotte Iliffe, daughter of Henry Gilding, and dedicated by the Reverend James William Sheppard.

Originally the memorial was surrounded by four stone corner piers and ornate railings but in 1989 the railings were damaged by car impact.

Haxey and Westwoodside War Memorial, situated in the village of Haxey at the junction of Epworth Road, East Lound Road and Low Street, is listed at Grade II for the following principal reasons:

Historic interest:
* Association: as an eloquent witness to the tragic impact of world events on this community, and the sacrifices it has made in the conflicts of the C20;

Architectural interest:
* Design interest: an impressive composition with an elegant and striking marble figure and polished Aberdeen granite pedestal, plinth and base;
* Sculptural interest: a powerful and expressive piece of work comprising a finely-modelled figure of a soldier with head bowed.