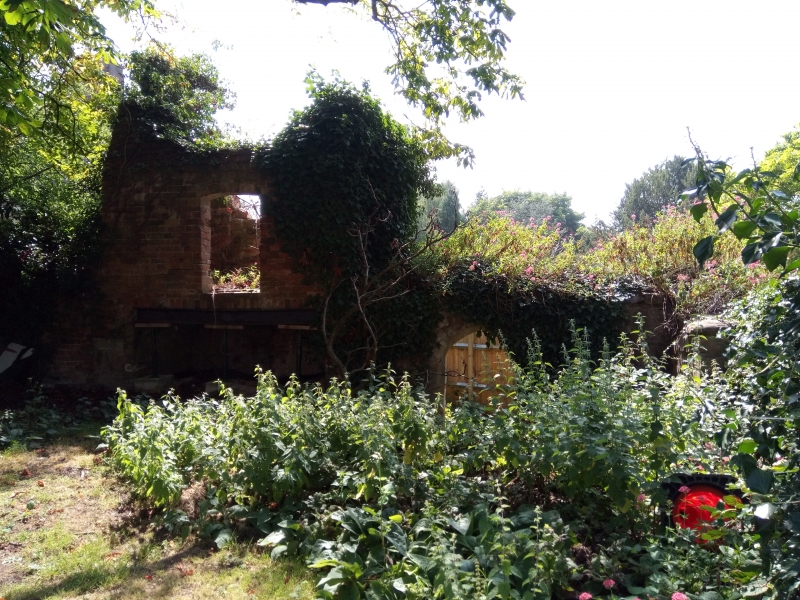 A structure thought to date from the C14, possibly forming part of historic rectory for the Church of St Alphege.

A structure thought to date from the C14, possibly forming part of a historic rectory for the Church of St Alphege.

MATERIALS AND PLAN
The structure is largely L-plan and is built of red sandstone coursed and random rubble with some ashlar, with brick repairs of the C17 and C18 and later.

DESCRIPTION
The remains of the Ruin now consist of two sections of wall, forming the S and W walls of a former room. In the S wall there is a large fireplace with a steel lintel and brick above. The rear of the fireplace is a mixture of stone and brick and extends outwards from the line of the wall. Adjacent to the fireplace is a door in a pointed arch surround; this is chamfered on its N face, and splayed to the S.

The W wall is blank and has a large section of brick repair. It has large quoins at its N end and a small surviving projection of the former N wall. This contains a small window in a chamfered surround, with a large splay internally. Parts of the E wall may survive beneath undergrowth.

The structure known as The Ruin, which stands approximately 50 metres S of the Church of St Alphege in Solihull, has an uncertain history; its original function is largely unknown. It has been described at various times as a chapel or well house for the Holy Well of St Alphege, or an oratory for a former rectory for the church. It is thought to date from the C14.

The structure was surveyed and the ground within it excavated c.1890 by JA Cossins of the Birmingham and Midland Institute's Archaeological Section. At that time, four walls were standing and the N wall, now gone, contained a pair of pointed arch doors. The excavation discovered a stone cist adjacent to the N wall, and a cistern on the S side with earthenware pipes running to it.

The Ruin is shown on the 1888 Ordnance Survey map as forming part of a walled garden for the former rectory, which stood just to the S and was replaced in the 1930s. The N wall of the Ruin is no longer extant by the time of the 1936 Ordnance Survey map. Today, the remains of the structure stand N of the rectory, with late C20 residential buildings between it and the church.

REASONS FOR DESIGNATION
The Ruin, Solihull, a structure dating from the C14 and thought to have formed part of a medieval rectory for the Church of St Alphege, is listed at Grade II for the following principal reasons:
* Survival: the Ruin has considerable interest as built fabric surviving from the C14;
* Architectural interest: the surviving features on the structure demonstrate that it was once part of a building of some importance;
* Group value: particularly with the Grade I-listed Church of St Alphege.