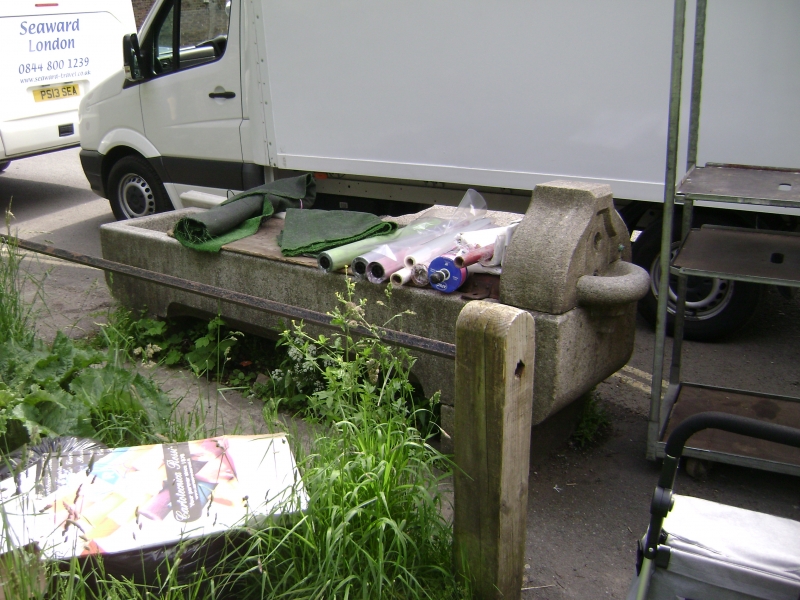 Cattle trough and drinking fountain, about 1916.

Cattle trough and drinking fountain, about 1916.

DESCRIPTION: this example would appear to conform to the “1d” design type, and is approximately 9ft 6in long. It is made from granite, and consists of a water tank resting on squat piers, with a gabled west end which allows for an integrated drinking fountain on the west face. The spout and pump mechanism is missing. An inscription bearing the name of the Metropolitan Drinking Fountain and Cattle Trough Association is present on the east face of the tank.

In the C19 special provision began to be made for drinking troughs for cattle, horses and dogs, and these were often provided by charitable associations. The best known of these was The Metropolitan Drinking Fountain and Cattle Trough Association (MDFCTA), founded in 1859 as The Metropolitan Free Drinking Fountain Association, the name altered in 1867 to include troughs. They were responsible for over a thousand troughs in Britain and overseas, about half of which were located in London. Early troughs of iron or wood are particularly rare, and were usually replaced from the 1860s by the more familiar and more enduring granite examples, mainly dating from the late C19. Although generally following a simple design, more elaborate examples do exist. Some designs include ornamentation, and can also be constructed of alternative materials, such as Portland stone or red granite. Troughs are the most numerous reminders of the now-vanished presence of animals in city life, and in this motorised age they possess an added poignancy as a result.

This example is found on Spaniards Road, Hampstead Heath. There is no date engraved on the structure, and this trough does not appear on any map of the area prior to 1952. The MDFCTA archives suggest that this trough may be structure number 2064 in their records, which would give a potential date of erection of 1916, but the possibility that the structure has been moved from its original location cannot be ruled out.

The cattle trough and drinking fountain, Spaniards Road, Hampstead is listed for the following principal reasons:

Architectural interest:
* as a good example of one of the MDFCTA’s standardised designs, with integrated drinking fountain.