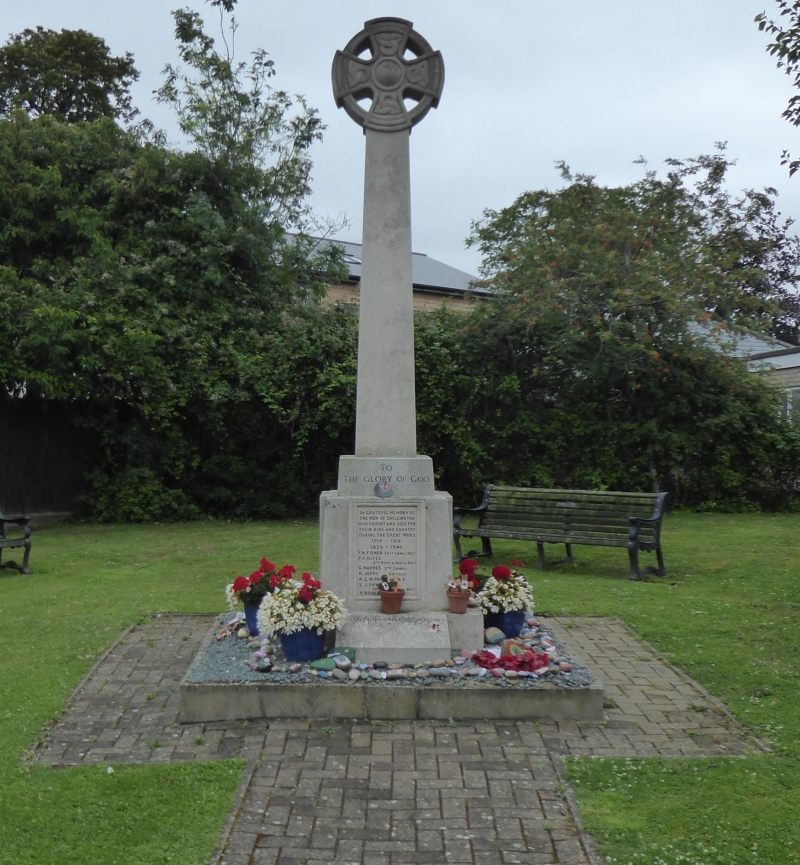 DESCRIPTION: the memorial is located in the Memorial Garden on High Road adjacent to the village hall. It comprises a wheel-head Celtic cross with central boss and relief-carved knot work on the head. It is set upon a tapering shaft which rises from a plinth on a square base. The names and inscriptions are set in recessed panels on three sides of the plinth with the lettering in black.

The west face of the plinth bears the inscription IN GRATEFUL MEMORY OF/ THE MEN OF SHILLINGTON/ WHO FOUGHT AND DIED FOR/ THEIR KING AND COUNTRY/ DURING THE GREAT WARS/ 1914 – 1918/ 1939 – 1945/ followed by the names of the fallen from the Second World War. On the north and south faces of the plinth are recorded the names of the First World War fallen. An inclined stone block bearing one name from the Second World War abuts the west side of the base of the memorial.

One such memorial was raised at Shillington as a permanent testament to the sacrifice made by 26 members of the local community who lost their lives in the First World War.

The memorial, which stands on land given by Mrs Handscombe, cost some £200 to build and was unveiled in August 1922 by M G Townley, who was Member of Parliament for Mid Bedfordshire. The memorial stands on a paved area set within a grassed memorial garden. A short pathway leads to the memorial from an entrance gate.

Following the Second World War, the principal inscription panel on the memorial was re-cut to include the names of the seven fallen of that conflict. This additional inscription was unveiled by Horace Haynes, who had been a Prisoner of War in Japan, at a service on Remembrance Day in 1946.

Repairs to the memorial have taken place in the 1980s and in 2009 a stone wedge bearing the name of a soldier who died in the Second World War was installed at the foot of the memorial.

Shillington War Memorial, which stands in the Memorial Garden adjacent to the village hall on High Road, is listed at Grade II for the following principal reasons:

* as an eloquent witness to the tragic impact of world events on this local community, and the sacrifices it has made in the conflicts of the C20.

* as an elegant and well-executed Portland stone cross with carved decorative details.