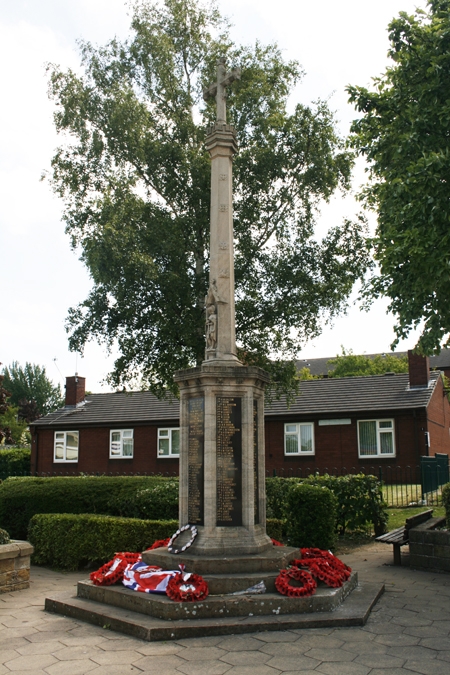 MATERIALS: limestone with a sandstone base and polished-granite plaques.

South Elmsall and Moorthorpe war memorial is located alongside Barnsley Road, at the junction with Dearne Street. The memorial, which is constructed of limestone, is in the style of a market cross and is set upon a hexagonal four-stepped sandstone base. A tall hexagonal plinth with crenellation-style carving and Tudor-flower decoration to the top has a black polished-granite plaque to each face with gilded lettering bearing the names of those killed during the First and Second World Wars; four plaques commemorate the 172 men lost during the First World War and two plaques commemorate the 73 men lost during the Second World War. The plaque to the front (north-west) face also incorporates an inscription that reads 'TO THE GREATER/ GLORY OF GOD/ THIS CROSS/ IS ERECTED/ IN MEMORY OF/ THOSE WHO GAVE/ THEIR LIVES/ FROM/ SOUTH ELMSALL/ AND/ MOORTHORPE/ IN THE/ WORLD WARS/ 1914-18 1939-45'. The plinth supports a slender tapering hexagonal shaft that also has crenellation to the top and is surmounted by a floriated cross. The shaft incorporates a gableted niche to the front (north-west) face containing a statue of St George, and adorning the shaft's alternate faces are small reliefs, some of which possibly originally represented regimental badges, but are now heavily weather worn.

A war memorial in South Elmsall was first proposed in 1920, but it was not until 1923 that plans came to fruition. The war memorial was intended to commemorate men from both the town of South Elmsall and the nearby village of Moorthorpe who had died during the First World War. Most of the local men commemorated were from the 49th and 62nd (West Riding) Infantry Divisions and were miners from Frickley Colliery.

The memorial was designed by Wilfrid Bond (1870-1935) of Grantham, Lincolnshire who trained under Charles Kirk, John Loughborough Pearson and Mackay Hugh Baillie Scott, set up his own practice in 1902, and who specialised in historic restorations and ecclesiastical commissions. The memorial cost £450, which was largely funded by public subscription, and the land for the memorial was donated by the Carlton Main Colliery Company who owned Frickley Colliery.

The war memorial was unveiled on 2 July 1923 by Major-General A A Kennedy CB CMG GOC West Riding, and was dedicated by Rev H F Elgood who had served as Chaplain with the 49th Division. The names of those killed during the Second World War were added later.

South Elmsall and Moorthorpe war memorial, erected in 1923, is listed at Grade II for the following principal reasons:

* it has strong cultural and historic significance within both a local and national context, and is an eloquent witness to the impact of tragic world events on this local community and the sacrifice it made in the conflicts of the C20.

* it has an elegant market-cross design with carved decoration;

* it was designed by Wilfrid Bond of Grantham, a notable regional architect who specialised in ecclesiastical and commemorative commissions.