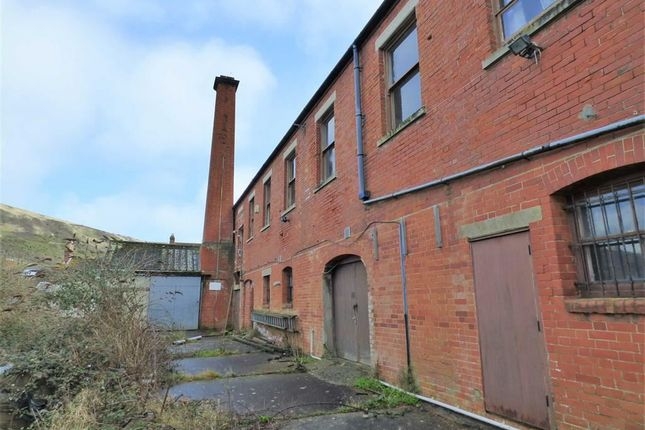 Former steam laundry, 1899-1900, by J Lawton Webster, surveyor for the Portland Local Board.

Former steam laundry, 1899-1900, by J Lawton Webster, surveyor for the Portland Local Board.

MATERIALS: constructed from red brick with Portland stone dressings. The roof, replaced in the C21, is profiled metal sheeting.

PLAN: the laundry stands to the south of Brymers Avenue, on a steeply-sloping site. Its main range is a rectangular block orientated roughly east-west. It has an outshut to the east, and a boiler room and smokestack to the north. A late-C20 extension (excluded from the listing), stands to the south, built into the rising ground.

EXTERIOR: the main range of the building is a double-height block beneath a saw-tooth roof of three pitches. The main entrance is on the west elevation, and is a carriageway arch reached by a short set of concrete steps (a later insertion). Windows, which on this elevation are replacements, are within plain, regular openings, and have chamfered lintels and projecting sills. An outshut, likely to have contained the offices, stands to the left of the elevation. The roofline is a trio of gables. Within each is a small, rectangular window; these are likely to have replaced ocular ventilation openings, which are extant (though blocked) on the corresponding gables of the east elevation. There is a projecting course of bricks following the jagged roofline, and a header course forming the coping.

The north elevation, facing down the hill, is two storeys. There is a wide layer of mortar at storey height, beneath which the brickwork appears to be earlier. On the upper storey there is a row of eight windows, most of which retain one-over-one sashes. The left-most window has been blocked and a loading door inserted. On the ground floor is a series of doors and windows, some with cambered brick heads, others with concrete lintels and brick sills, indicating insertions. At the northern corner is the square smokestack with moulded brick cornice, and the boiler house: a small unit with a pitched roof.

The east elevation is blind; the ocular vents in the gables have been blocked. The north elevation has been largely obscured by the late-C20 extension (excluded from the listing), and is otherwise blind.

INTERIOR: the structural system of the building is apparent internally: the roof pitches are supported by the load-bearing outer walls, and the two internal valleys by two rows of eight cast-iron columns. The space is subdivided by late-C20 partitioning, and a mezzanine level has been inserted on the east side of the building. There is some brick partitioning at the northern corner. The roof trusses are an asymmetrical triangle with a steeply-pitched north side, originally supporting a glazed and ventilated roof. Each truss is a triangular timber structure with a steel rod between the apex and tie beam.

The basement-level accommodation on the northern side of the building was inaccessible during our inspection. It appears to consist of a series of small rooms, formerly stables and fuel stores. It does not link internally with the main ground floor.

A purpose-built steam laundry was constructed in Fortuneswell, Portland, in 1899-1900, to the designs of J Lawton Webster, the surveyor for the Portland Local Board.

Commercial steam laundries proliferated in the late C19 and early C20. The appetite for clean linen was established earlier in the century, and had become both a sign of economic prosperity and a social responsibility. Technological innovations in laundering equipment transformed a labour-intensive cottage industry into a mechanised one, though still requiring significant number of workers. The number of commercial steam laundries built is not known, though trade directories indicate that they were widespread and located in most towns and cities.

A report in the Southern Times and Dorset Herald from 1900 describes the process at the Fortuneswell laundry. The book keeper’s office was at the main entrance to the building, presumed to have been within the extant outshut block. Laundry was deposited via the main entrance and conveyed to a nearby sorting room, then to the washing machines. Drying was a multi-stage process first involving a ‘hydro’, which removed the excess liquid by centrifugal force, and then by hot air. There was an ironing room, with gas-powered irons, a starching machine, a goffering machine, and a machine for finishing collars. Articles were finished in an airing room, and then sent to an adjacent packing room, before being sent away in baskets. There was also a mess room for the staff. Steam laundries required a boiler house, which here survives along with the smoke stack, which was built subsequent to the main structure, and they often had stabling for horses, used to transport the goods to and from customers. The lower-level accommodation on the northern side of the building served this function; the change in brickwork between the upper and lower storeys suggests that an earlier structure may have been incorporated, and the lower storey bears evidence of modification of the openings.

The increased affordability of the domestic washing machine and the rise of the laundrette in the mid-C20 resulted in the decline of the industry and the closure of most commercial steam laundries; Portland was no exception. Following its closure the equipment was removed, and the building was adapted for use as an engineering workshop. The conversion involved the insertion of partitioning and a suspended ceiling. The southern extension, dating from the late C20, is excluded from the listing. When the roof was replaced in the early C21 the glazing on the northern planes was not reinstated. The building remained in use until the early C21, and now stands empty.

The former Portland Steam Laundry, 1899-1900, is listed at Grade II, for the following principal reasons:

* a functional and robust industrial building with a highly-distinctive massing and form, which continues to express its industrial function, where receipt and dispatch, administration, power generation and stabling all survive;
* alterations are clearly discernible and have not compromised the overall form of the building, which survives well.

* a rare and representative example of a commercial steam laundry, a building type which was once common but has been largely lost with the decline of the industry.