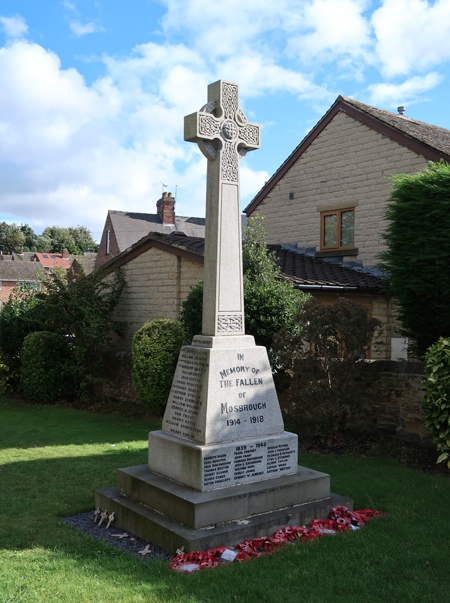 PLAN: a cross set on a tapering, square base on a square plinth and standing on two square steps.

DESCRIPTION: the war memorial stands within the grounds of St Mark’s Church. It takes the form of a tapering Celtic cross in Aberdeen granite with lead lettering painted black. The front, west face of the cross has a raised knot work design to the cross head and an incised border to the shaft with a raised knot work panel at the base. The shaft stands on a deep, tapering base. The west face of the base has the lettering IN / MEMORY OF / THE FALLEN / OF / MOSBOROUGH / 1914 – 1918. The north, south and east faces of the base bear the names of the regiments the 49 men belonged to, their rank, first names and surnames.

The west face of square, granite plinth has the dates 1939-1945 and the first names and surnames of 21 men. It stands on two stone steps, the west face of the top step inscribed NEW ZEALAND and a name.

One such war memorial was raised at Mosborough as a permanent testament to the sacrifice made by members of the local community who lost their lives in the First World War.

In October 1918 a public meeting was held in Mosborough to decide upon a memorial to the local men who had recently lost their lives in the First World War. Initial discussions decided it should take the form of a public hall with a suite of rooms for parochial purposes. It is not known when this plan was replaced with a memorial cross, but Mosborough War Memorial was unveiled on 13 June 1920 with a service presided over by the Revd W R Hewson, Rector of Eckington. The memorial recorded the names of 45 local men who died in the First World War.

In 2013 the war memorial was cleaned and renovated to improve the legibility of the lettering.

Historic interest:
* as an eloquent witness to the tragic impact of world events on this local community, and the sacrifices it made in the First World War and the Second World War.

Architectural interest:
* a dignified and attractive memorial in the form of a Celtic cross in Aberdeen granite with decorative raised knot work detailing, providing a fitting tribute to the lives lost.