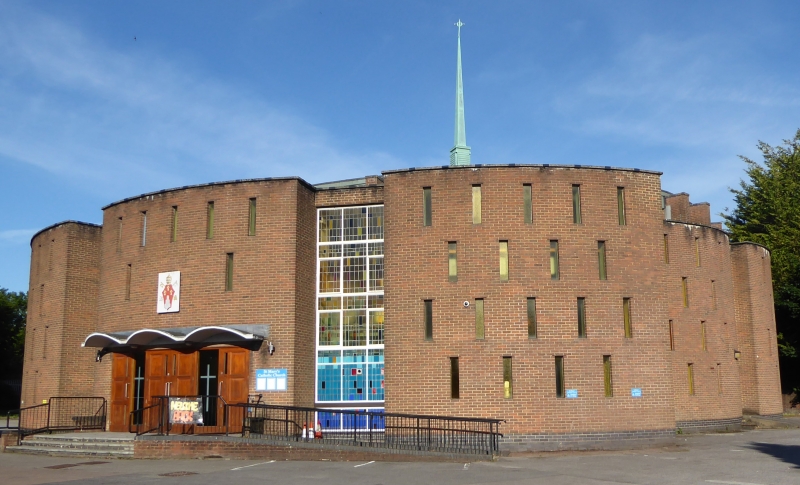 A Roman Catholic parish church of circular plan constructed between 1962 and 1964 to designs by Desmond Williams OBE.

A Roman Catholic parish church of circular plan constructed between 1962 and 1964 to designs by Desmond Williams.

MATERIALS: the structure of the church is of load-bearing brick and concrete, with walling in red-brown Fletton bricks and stained glass. The roof is of steel trusses covered in copper and asphalt. The interior features ironwork, and joinery of pine and laminated tropical hardwoods.

PLAN: the church is organised around a circular worship space with twelve projecting segments forming petal-like bays around its circumference. To the south east three full-height bays extend further outwards and are combined to form an entrance foyer with a baptistery and chapel at either side. Stairs from the foyer lead to a gallery which cantilevers into the worship space. An ambulatory runs around the perimeter of the worship space cutting archways through brick piers to create a continuous path. Behind the altar the ambulatory ramps upwards and connects with the sacristy and boiler room in a single-storey projection to the north of the church.

EXTERIOR: the exterior is divided into twelve bays separated by full-height stained glass recesses with rectilinear multi-coloured panes. Set back above these bays is a plain-glazed clerestory beneath a copper roof that rises gently to a needle-like spirelet topped with a Celtic cross. The principal entrance is at the centre of three projecting bays. Three modern replacement doors are accessed under three segmental concrete hoods to access the foyer. Above the hoods is the coat of arms of Leo Parker, Bishop of Northampton at the time of the opening of the church, either side of which is a narrow window and five further windows are above. Most other bays have ten slit windows arranged across four rows. The three bays at the north-west are not separated by glazing and connect to a single-storey projection with plain windows and a doorway at the top of a small cantilevered flight of concrete steps.

INTERIOR: the worship space consists of four polygonal ranks of pews in good quality pine with open backs and upholstered kneelers on hinges. The bench ends follow the geometry of the benches and each has a cross in relief at the uppermost corner. The nave floor, which has developed large cracks, is original and is laid in diamond patterns of grey and white tiles. Axially positioned opposite the entrance and in front of the pews is a wide polygonal sanctuary with a communion rail of cruciform brass stanchions and a dark marble top. The sanctuary steps are terrazzo and lead to a large white marble altar inlaid with gold mosaic tiles reading: ADORO TE DEVOTE. Iron openwork behind the altar supports a large crucifix and allows views of the only bay to have stained glass in the narrow slit windows. The whole worship space is unified by a sound-absorbing ceiling of 600 aluminium pyramids in 18 shades of blue and white radiating in concentric rings from a Greek cross in a boss at the centre. Williams' design for the ceiling evokes medieval fan vaulting, especially that of the chapel at King's College, Cambridge. Within the ambulatory there are two confessionals clad in tropical hardwood with plain interiors.

To the east of the narthex is a baptistery entered through a screen of iron openwork of the same design as the reredos and lectern, on which hang two carved doves. The baptistery, now a shop, retains a round font in fine white marble carved with a pattern of squares that echo the stepped square recess in the floor (now covered) and a suspended wooden square of the same proportions that hangs from the ceiling. The font is supported on a square shaft with a mosaic figure of St John the Baptist on the front and water on the back.

In the late-C19 and early-C20 the Roman Catholic Church in England was growing. That expansion entailed the construction of a large number of buildings serving the religious and social functions of the Catholic community.

Until 1927 practising Catholics in Dunstable would travel to nearby towns to attend services. In that year the Bishop of Northampton granted a petition for Mass to be said in Dunstable under the leadership of the Congregation of the Mission, commonly called the Vincentians. The new parish, dedicated to Our Lady of the Miraculous Medal, constructed its first church in 1935 in what has become the Parish Social Centre to the south-east of the present church. The former building survives but has been very heavily altered. As the town grew significantly after the Second World War plans were drawn up for a bigger building in 1961 and the foundation stone of a new church was laid on 29 April 1962. Leo Parker, Bishop of Northampton, blessed and opened the building on 15 March 1964. The new church, dedicated to Our Lady Immaculate, had cost £72,000 and was built by R Willis and Son.

The new building, designed by Desmond Williams, is circular in plan. The internal layout places the altar in front of the congregation, rather than at the centre as was the case at ground-breaking churches of the Liturgical Movement in church design (for example, Keith Murray and Robert Maguire’s Anglican church of St Paul, Bow Common, Grade II*, 1958-1960; or Frederick Gibberd’s design for the Metropolitan Cathedral of Christ the King in Liverpool, Grade I, 1962-1967). Williams’ work was nevertheless at the forefront of new design and draws the congregation together around the altar, anticipating the emphasis on greater communality in worship that lay at the heart of the major reforms of the Second Vatican Council (particularly the 1963 Constitution on the Sacred Liturgy). The liturgical arrangement at Dunstable is very similar to some highly significant later churches, most notably the Roman Catholic Cathedral at Clifton (1969-1973, Grade II*).

Alongside the new church a contemporary presbytery and offices were constructed, and a later hut was built to the north of the church adjacent to a (2000) Garden of Remembrance. The church has not been heavily altered since its completion, though the baptistery has been re-purposed as a shop.
Desmond Williams and Associates designed a number of modern churches, including the Roman Catholic Church of St Augustine, Manchester, 1966-1968 with a notable reredos by Robert Brumby (Grade II), the Roman Catholic Church of St Dunstan, Birmingham, 1966-1968 (Grade II), and the Roman Catholic Church of St Michael, Penn, Wolverhampton, 1967-1968 (Grade II). Desmond Williams worked with Arthur Facebrother before setting up his own practice in Manchester, which in around 1970 amalgamated with W and J B Ellis to become Ellis Williams Architects (still in practice today). Williams' work was recognised with an OBE in 1988.

The Roman Catholic Church of St Mary, Dunstable, constructed 1962-1964 to the designs of Desmond Williams is listed at Grade II for the following principal reasons:

* it is an early example of the impact of the Liturgical Movement on church design and anticipated the reforms adopted in the Second Vatican Council;
*      as an important early work in the career of Desmond Williams, an architect notable for his innovative church buildings at a time of great change in ecclesiastical architecture.

* for its innovative circular form and layout;
* for its intact interior, including good quality bespoke furnishings and a highly unusual tetrahedral ceiling.