Roman Catholic Church Of Our Lady And St Finnan, Glenfinnan

A Category B Listed Building in Caol and Mallaig, Highland 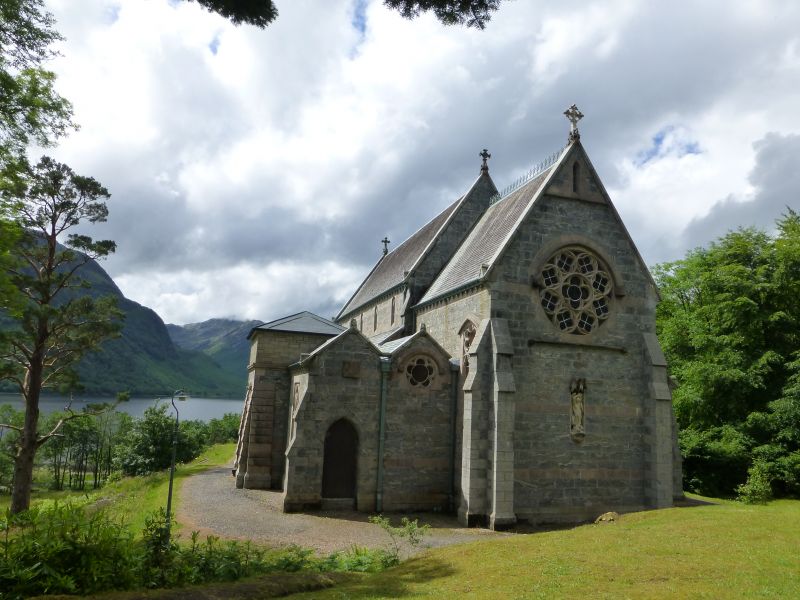 W ELEVATION: mirror of E elevation, with exception of porch.

Place of worship in use as such. The RC Church of Our Lady and St Finnan is a prominent and well-detailed Gothic church by architect, Edward Welby Pugin, and a major example of a Roman Catholic Church in the area. The church is prominently sited on the hillside at the head of Loch Shiel, offering uninterrupted views of the loch. The building retains much of its original high quality Gothic detailing such as geometric-traceried windows and carved finials, skew putts and stops. This detailing is continued internally in the design of the baptismal font, distinctive pews and scissor roof truss. Foliage is a prominent theme in the carvings. Roses, thistles, figs and acorns are depicted in the capitals of the columns separating the nave and aisles and the stops to the south entrance door depict shamrocks and thistles representing the transfer of faith from Ireland to Scotland.

The church of Our Lady and St Finnan was funded by the MacDonalds of Glenaladale, the last lairds of Glenfinnan. The MacDonald family were loyal supporters of Prince Charles Edward Stuart and during the Jacobite rising in 1745-6 members of the family accompanied the Prince in his flight from the government forces following the defeat at Culloden. Alexander Macdonald of Glenaladale funded the construction of the nearby Glenfinnan monument (see separate listing) to commerate the clansmen who fought and died. Captain John Glenaladale organised the first Highland mass emigrations to Prince Edward Island in 1771-2, funded by the sale of his estate.

The family were unable to complete the church to Pugin's original designs. The bell, on its arrival from Dublin, was considered to be too large and the belltower was never completed, The stone for its construction was placed in the grounds of the church. The bell is inscribed "THOMAS SHERIDAN & CO EAGLE FOUNDRY DUBLIN 1875" and "BENEDICITE MONTES ET COLLES MARIE ET FLUMINA DOMINO" (Mountains and hills and rivers, bless the Lord Mary). The stained glass window was added 1995-6, and was designed by Ormsby of Scarisbrick after sketches by Fr. Callum MacNeill. The window was funded by Mr and Mrs Louis Gordon, a descendant of the Glenaladales, who wished to see the window completed before his death.

Edward Welby Pugin was the eldest son of the internationally renowned Gothic architect AWN Pugin. EW Pugin was brought up in his father's office and founded the architectural practice of Pugin and Pugin. Following the death of his father in 1852, he completed his outstanding commissions undertaking revisions in his father's style. In 1856 he was appointed additional assessor in the Lille Cathedral competition. Thereafter he began working in an individualistic French and Flemish Gothic style, often with strong polychromatic effects. He designed a number of Roman Catholic churches in Scotland including the St Stephen's RC Church, Blairgowie (1856) and St Mary's RC Chapel, Haddington (1862) (see separate listings). The RC Church of Our Lady and St Finnan is one of Pugin's last buildings in Scotland before his death in 1875.