A Category A Listed Building in Midlothian South, Midlothian 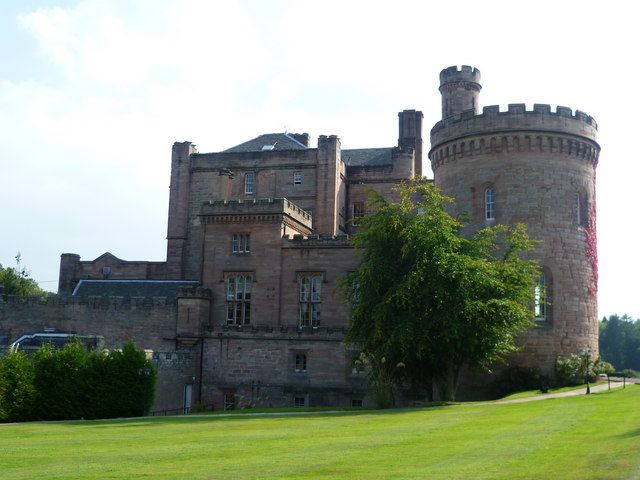 B Group with Folly on W Bank of River South Esk, Folly on E Bank of River South Esk, Dalhousie Bridge over River South Esk, West Lodge and Grove Farm (former Dalhousie Walled Garden). Dalhousie Castle was described by Groome as "a stately castellated pile" (p335). Simon de Ramsay was granted the barony of Dalhousie, then "Dalwolsie" (meaning Vale of Wool), in the early 12th century, and George Ramsay was created Lord Ramsay in 1618. William, 2nd Lord, became the Earl of Dalhousie in 1633, converting the castle into a renaissance mansion and leaving his initials and those of his wife in the pediments on the W Elevation. The castle, which originally comprised of a keep and curtain wall surrounded by a dry moat (now filled in), is built of pink sandstone which is thought to have come from the adjacent quarry (now disused). Over the centuries the castle has been much altered. The castle was also Geogianised by George Paterson between 1778 and 1779. According to Sir Walter Scott "the old Castle of Dalhousie...was mangled by a fellow called, I believe, Douglas, who destroyed, as far as in him lay, its military and baronial character, and roofed it after the fashion of a poor's-house. Burn is now restoring and repairing in the old taste" (Journal for 23 December 1827). William Burn restored the mullion and transomed windows, the gothic interiors and also castellated the curtain wall. In 1867 the upper storey of the castle was lost to fire, but has been restored. Between 1927 and 1950 it was used as a prep-school for boys, in 1955 it became an hotel for the accommodation and entertainment of Canadian visitors from the Dalhousie College in Canada, and in 1985 it became an hotel. The grounds, which had open areas of sweeping curved woodland, illustrated by Nasmyth and described in the NSA as "singularly beautiful", were laid out by James Robertson before 1750, and were referred to by J.C. Loudon as having an "extensive collection of trees and shrubs", the landscape was altered in the mid 19th century.