A Category A Listed Building in Rosyth, Fife 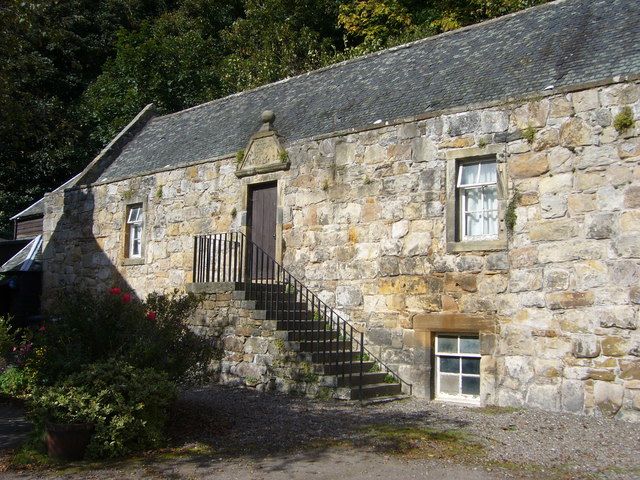 The King's Cellar, despite its rather misleading name, serves as a reminder of Limekiln's early relationship with Dunfermline Abbey and of its trading position by the Firth of Forth. Limekilns operated as a port and The King's Cellar was probably built as a monk's grange, a storehouse for, most likely, Dunfermline Abbey. The building is first mentioned in 1362 but it is only in the 19th century that it is referred to as The King's Cellar. Despite its alterations, the King's Cellar is one of the most interesting buildings in Limekilns. The central door and upper floor windows were inserted when the building was used as a school, hence the name of the square. F W Deas undertook the restoration in 1911-1912 and added the present forestair which replaced a flight of timber steps , slated the roof and inserted the pediment. 18 inches of earth were removed from the ground floor during renovation, the level of which now lies beneath the current ground level. The outside ground level has risen enough to cover most of the pointed-arched doorway which was possibly the original entrance to the ground floor. A possible malt-kiln or glass furnace used for the manufacture of bottles was discovered during renovation at the W end of the building.

The remnants of the turnpike at the NE angle suggests at one time a higher floor or tower, possibly a beacon or lookout tower. Since the rooms are not connected to each other, it is possible that a forestair gave access to the 1st floor door at the W gable. The building has had a variety of uses including a wine cellar, storehouse, school, library, concert hall and an Episcopal church. In 1910 it was founded as a Freemason's Lodge, Lodge Elgin and Bruce, number 1077 on the Roll of the Grand Lodge of Scotland and this remains its current use. It belongs to the Broomhall Estate.