A Category A Listed Building in Banchory and Mid Deeside, Aberdeenshire 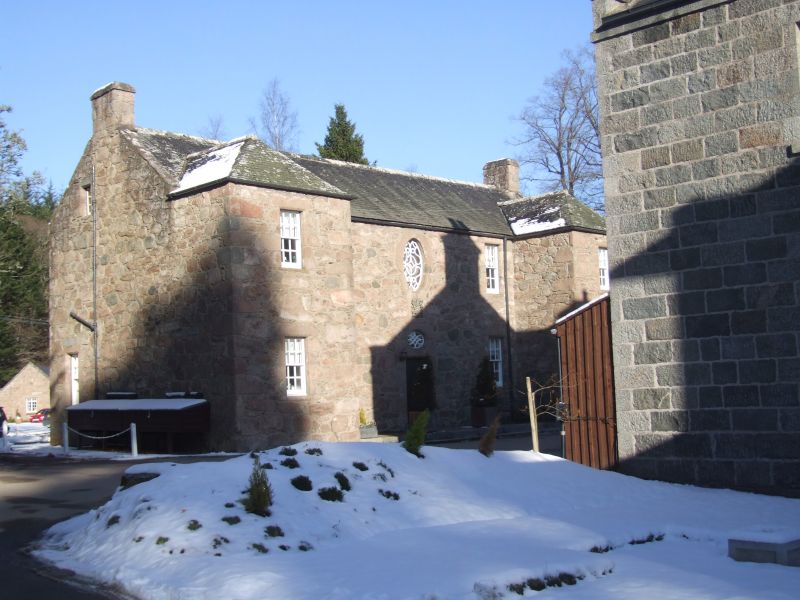 The interior was seen in 2013 and is predominantly of an early 20th century date. It has a central hall with flagstone floor and timber staircase. Panelled timber doors.

The Ha Hoose is an important and fine example of an early classical country house in rural Aberdeenshire. The property is largely unaltered to the exterior, retaining its classical proportions. Its survival is remarkable as a substantial nineteenth century house (see separate listing) was built immediately in front of it. Unusually the Ha' Hoose was not incorporated into the later house or demolished to make way for it.

The survival of the Ha Hoose is important in our understanding of the development of the estate. The house was constructed circa 1715, which was a significant period for country house design. As Glendinning et al explain in A History of Scottish Architecture: "The classical country house architecture which dominated from 1660 to 1760 answered the practical and symbolic requirements of the 'improving' landed classes in its potent mixture of antique stateliness and modernity." Classicism was a comprehensive system of values determining plan form, proportion and design rather than applied details to traditional Scottish architectural forms.

As evidenced by the armorial stone over the entrance, the house was constructed circa 1715 for the Hogg Family. The Hogg family may have succeeded to the estate of Raemoir when James Hogg (1661-1706) married Margaret Skene, the daughter of Robert Skene of Raemoir (Henderson, p.23). The Land Tax record of 1745 records that Robert Hogg was the proprietor of the estate with it being valued at £299. The Ha Hoose is evident on Roy's Military Map (1747-55) which depicts a building set in front of a wooded landscape.

Between the late eighteenth and early nineteenth century the estate passed to William Innes, a merchant from London. He set about improving the estate most notably constructing a new house in 1817 (see separate listing) which is immediately to the south of the Ha Hoose. As the Ha Hoose became superfluous as a residence from this date, it was used as a game larder and wood store.

The former list description states that the Ha' House was restored in 1923, however it is likely that the restoration dates to around 1927, when the present Raemoir House was altered. There are no early fixtures and fittings evident in the interior of the property and the interior plan form is likely to have been remodelled as part of this restoration or when the building was converted for use as an annexe to the hotel in 1943.

The spelling of Raemoir varies between maps and other historical records. The estate is also recorded as Raemore and Ramoir as well as other variations. It is not known when the building was first called the Ha' Hoose, which is a Scottish term for describing the principal house on an estate, often with a cellar and living apartments or a hall above.