A Category B Listed Building in Banchory and Mid Deeside, Aberdeenshire 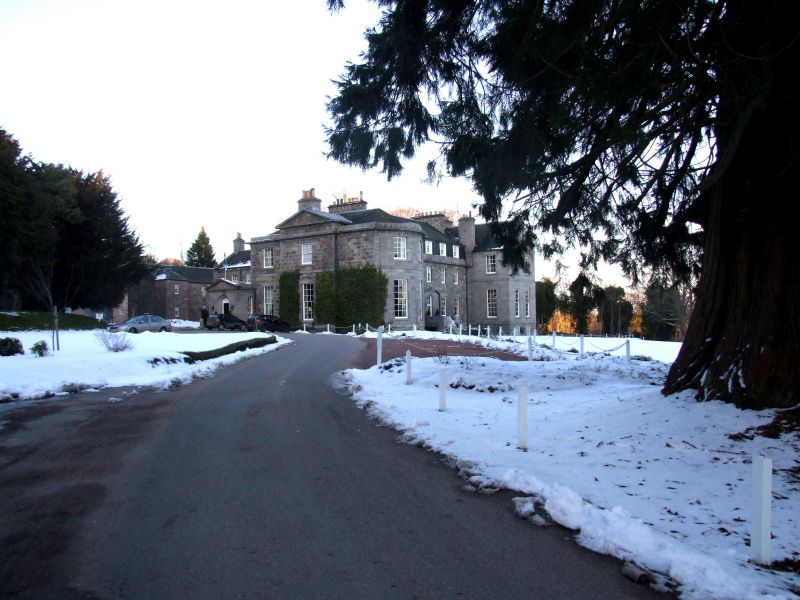 The interior was seen in 2013. Fine classical scheme of 1817, 1844 and 1927, characterised by decorative plaster ceilings and well-detailed timber work, including door and window surrounds and staircases. The dining room has semi-circular ends with curved mahogany doors set with bracketed and corniced door frame, deep reeded skirting board, decorative cornice and ceiling rose. The drawing room (1927) is reminiscent of a shooting lodge with walls lined in brown varnished timber boarding and a timber compartment ceiling, and marble and timber fire surround.

GATEPIERS AND QUADRANT WALLS: (at NO 69400 99041) square-plan gatepiers linked by coped quadrant rules. Gatepiers to centre with moulded pyramidal caps.

Dating from 1817, Raemoir House is a fine example of an early nineteenth century classical country house in Aberdeenshire and was designed by the eminent Scottish architect John Smith. The New Statistical Account of 1834-45 describes the building as "elegant and commodious". The building has fine interior detailing, particularly to the ground floor, from each phase of the development of the property. The building is situated immediately in front of the 1715 Raemoir House (see separate listing) and this setting is important in understanding the development of this estate.

The former stables to the northeast of the house and the entrance gatepiers and quadrant walls are important surviving ancillary components of the estate which enhances the architectural and historic setting of the house. The stables were converted to dwellings in 1986 but the original function and character of the building is discernible as evidenced by the segmental-arched openings. To the south of the hotel is a pair of pillars, which are likely to be circa 1840 as the stonework, particularly the rusticated bands, is similar to the stonework of the 1840s addition to the house. There function of these pillars is unknown as there is no evidence of fixings to indicate gatepiers.

The west wing is understood to have been added as part of the 1844 alterations by John Smith, but may include some 1817 fabric (Buildings of Scotland Research Unit). The exact date of the west wing addition is unclear. It is depicted on the 2nd edition Ordnance Survey map (1903), however the William Kelly plans indicate that he significantly remodelled and possibly extended this wing in 1927 (MS 3759/1/220).

Between the late eighteenth and early nineteenth Raemoir estate passed from the Hogg family to William Innes a merchant from London. He set about improving the estate, most notably constructing the present Raemoir House, immediately to the south of the original house. In the early twentieth century the estate was purchased by Viscount and Lady Cowdray, who commsioned alterations to the building in 1927 and from 1943 it has been run as a hotel.

John Smith (1781-1852) was one of two leading architects in Aberdeen during the early nineteenth century, with nearly every important commission won by him or Archibald Simpson. He was appointed City Architect in 1824 and for thirty years directed the public works of the rapidly expanding city. He is best known for his Greek revival designs but he was also skilful in blending classical with vernacular as is evident at Raemoir House.

William Kelly (1861-1949) was articled to the practice of William and John Smith, the son and grandson of the aforementioned John Smith. After 1887 he returned to the practice as partner, from which time it became known as W & J Smith and Kelly. Kelly and the practice were awarded several prestigious public and commercial commissions in Aberdeen, including extensions to the Aberdeen Royal Infirmary at Woolmanhill and Aberdeen Savings Bank (see separate listings). Kelly was commissioned to alter and extend Raemoir House by the Cowdrays of Dunecht in 1927. He officially retired in 1928, but remained consultant architect to Viscount and Lady Cowdray, doing much work on their Dunecht estate and consolidating and partly restoring Dunottar Castle.