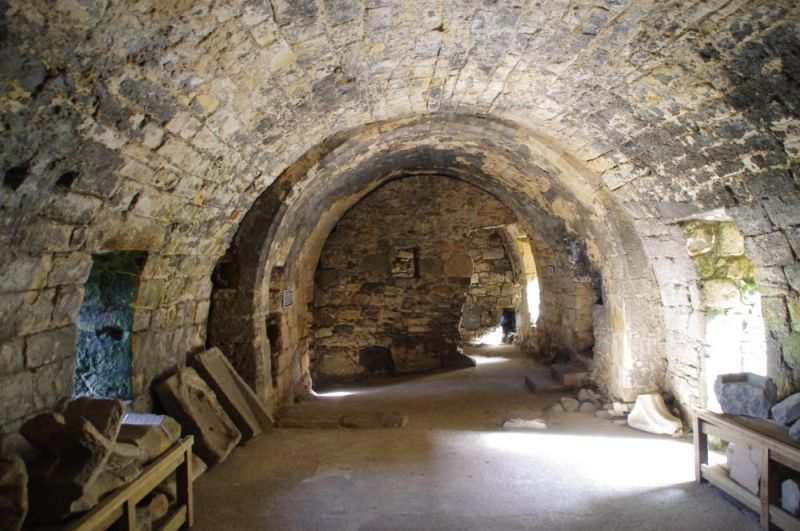 NOTES: SCHEDULED ANCIENT MONUMENT and PROPERTY IN CARE. Inchcolm Abbey is one of the most intact monastic complexes in Scotland spanning the 12th to 15th century. Late medieval records state that the abbey was founded by Alexander 1st in 1123. It is documented that Alexander 1st whilst crossing the Forth was blown off course by a violent storm, seeking refuge the ship dropped anchor at Inchcolm. A resident hermit on the island is said to have given him and his retinue shelter and food till the storm abated. In gratitude of this care the king vowed to found a priory on the island, however Alexander died in 1124 preventing the foundation from being finalised. The priory was established on the island by about the 1160s by David 1st, consisting of a very small church and chancel. By around 1200 the first church proved inadequate and a bell tower and enlarged choir and presbytery were built. In 1235 the priory's status was increased to that of an abbey, the church was therefore enlarged to meet the new demands placed upon it; the choir was doubled in length, a N transept added and the chapter house was constructed. During the 14th century the abbey was vulnerable to attacks by English forces. In 1385 the abbey was raided by 140 English soldiers who plundered the ornaments and furnishings. By the end of the 14th century the attacks had ceased and the abbey experienced a period of calm and prosperity. During this time both the church and domestic buildings were almost completely rebuilt; the church was replaced by a new church to the E, the nave of the old church was converted into domestic accommodation, the N transept was demolished and replaced by a smaller accommodation block and the cloister range was built. The religious life of the canons was terminated by the Reformation in 1560, however several were allowed to continue living on the island till the end of the 1570s. The church was partially dismantled in 1581 and the salvaged materials sold to the Town Council of Edinburgh for the rebuilding of the tollbooth. The cloister buildings however remained relatively untouched as they were converted into a residence where James Stewart the commendator of the Abbey lived. In 1611 the former abbey's lands were erected into a secular lordship with the son of James Stewart, Henry, taking the title of Lord of St Colme. At his death the title passed to the Earl of Moray. The Earl of Moray during the late 18th century tried to make the island more picturesque by planting a large number of trees around the island, the saplings however did not survive the rough and unsheltered conditions. The island served as a quarantine station for plague stricken ships in the 16th and 17th centuries. In the 1790s a Russian hospital was accommodated to serve the Russian fleet lying in the Forth. The strategic nature of the island within the Forth has seen fortifications built on the island during the Napoleonic War, World Wars 1 and 2. Remains of the 20th century fortifications lie to the E and W of the island, they include concrete gun aprons, observation posts and a tunnel through the hill and are scheduled monuments. The Abbey came into state care in 1924.