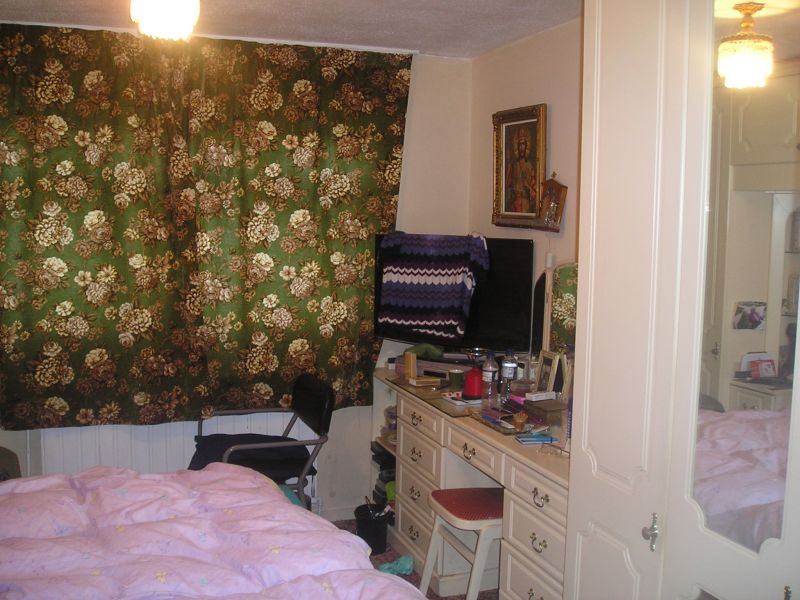 Walter Newall of Dumfries, 1812. Single storey with concealed attic on raised east facing basement, symmetrical, 3-bay, rectangular-plan Greek Revival style villa, set on sloping ground in a wooded area. The principal elevation has a distinctive classical central pedimented Ionic porch, with the entrance behind flanked by pilasters and a semi-circular fanlight (blocked) above.

Predominantly polished ashlar dressed stone in upper part, and rusticated ashlar to the basement level, all painted. There is a band course between floors, a string course at cill level in the upper floor, with a cornice and blocking course above. Exterior windows are largely blocked. There are shallow round-headed recesses to the central upper bay window openings, and all window openings have moulded architraves and cornices. There are non-traditional materials to the roof.

Interior was seen in 2013. Much of the interior detailing has been removed, though the general early 19th century room layout is evident.

Ladyfield West is a significant building because of its early date, the importance of its architect and its Greek Revival style. Although much of the interior of this villa has been lost, the principal elevation of this building is a stylish and well-detailed example of early 19th century domestic architecture.

Ladyfield West is relatively rare as it is one of a small number of Greek Revival urban villas which survive in Scotland. Its small scale invites comparison with villas such as Walton Hall in Kelso (see separate listing) with which it shares a number of features including the layout of the rooms. It also has much in common with some villas in the Blacket area of Edinburgh.

Originally called Hannahfield, Ladyfield West was built in 1812. Although the villa lies just outwith the area covered in John Wood's 'Plan of the Towns of Dumfries and Maxwelltown from actual survey', 'Hannahfield' is shown on the 1832 Reform Act Plan. The first reference to Hannahfield in newspapers is in 1832 when the owner, John Hannah, attended the funeral of the wife of Robert Burns.

The house was designed by Walter Newall (1780-1863) who was the leading architect in Dumfries from about 1820 until his retirement in the 1860s. It is one of Newall's earliest domestic designs. Newall trained as a cabinet maker. His early drawings of furniture show he was already a competent draughtsman and had an up-to-date knowledge of the Greek Revival style before he embarked on an architectural career in about 1810 after the failure of his cabinet-making business.

The client, John Hannah, whose family had made their fortune in the West Indies, had spent the earlier part of his life in Kingston, Jamaica. However he must have soon become acquainted with Newall on his return to Scotland to entrust an untried architect with the design of his house. The house and estate were also deemed to be suitable for inclusion in John Claudius Loudon's 'Encyclopaedia of Cottage Farm and Villa Architecture' of 1831. That summer Loudon visited the estate and was shown around by Hannah and Newall. Plans of the two floors of the house with an elevation of the façade and a plan of the estate are illustrated and described. Hannah 'was his own landscape gardener' and Loudon, the professional, finds fault with the lack of trees near the house but makes suggestions for improvements.

In its original condition it was a very well designed and detailed house villa with a compact layout. Many exterior features including the Ionic porch are noteworthy. Internally the plasterwork, groin vault in the lobby and central hallway with alcove were of particularly high quality. However, the tall decorative groups of stacks have been removed and many of the interior features have been removed. The basement at the front has been roofed over.

When John Hannah died in 1841 he left no will and Thomas Wood, his nephew and nearest relative, inherited his uncle's estate. Wood was living in the nearby Ladyfield (Ladyfield East, see separate listing) and moved to Hannahfield at some point in the 1850s but died soon thereafter. His widow, Elizabeth Brooks, continued to live there until her death in 1868. She too died intestate and the estate of Hannahfield became the property of the Crown. Thus there is an interesting historical connection between the villas of Hannahfield and Ladyfield (Ladyfield West and Ladyfield East).

The Crown arranged that the estate would be gifted to the Burgh of Dumfries. However there was a lapse of time and a new Government rescinded on this agreement. The estate was given to the War Department. In 1889 the Crichton Royal Hospital leased Ladyfield West to the War Department and it was used as a residence for some of the 'First House gentlemen' who were inmates at the hospital. In the 1890s the western part of the estate was divided off and a new entrance was formed to the north east of the house. This part became the poultry farm of the hospital. In 1929 Hannahfield was finally purchased by the Crichton Royal Hospital. It was closed in the early 2000s and at the time of review (2013).

Listed building record updated and category changed from A to B (2014).