A Category A Listed Building in Durisdeer, Dumfries and Galloway 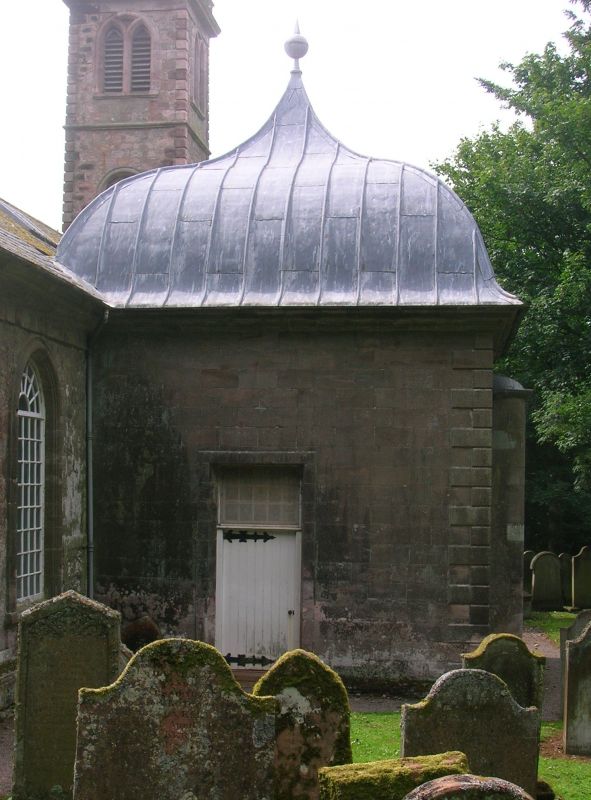 All probably by James Smith. 1718-20 church and west wing

with vestry (latter built as Ducal Withdrawing Rooms and

session house) with square tower above, adjoining circa 1708

Church and mausoleum arranged in Greek-cross plan, wing and

architraves; small-paned glazing (not original); rusticated square-headed doorway to east and to south, each linked with

re-arranged circa 1870) separated from mausoleum by wide

with back board now placed against these; boxed communion

pews; 3 galleries, each with panelled front and 2 supporting

bolection-moulded and lugged architrave, with dentilled

cornice and round-headed window above; other windows all

square-headed, and linked between floors by shallow aprons.

Each face of tower has blind oculus (originally with

and round-headed belfry opening to upper stage, cornice, and

on west wall beside main door; vaulted passage at foot of

blocked; wheel stair to tower entered in base of north west

many with classical ornament; martyr's monuments (to Daniel

MacMichael) and 1685 monument to children of William Lukup,

Master of Works at Drumlanrig.

Ecclesiastical building in use as such. Roof of south jam of

church originally identical to that of mausoleum, ie

bell-cast and leaded; body of church originally had "a

pavilion roof (with) plates of lead alongst the peens" (ie

angles); steeple which was "about 90' high beside the rod

that carries the weather-cock" was leaded and windowed; it

in presbytery minutes to building of church, but there is a

Pulpit originally on east corner of junction between body of

including building church at Durisdeer," etc.