A Category B Listed Building in Callander, Stirling 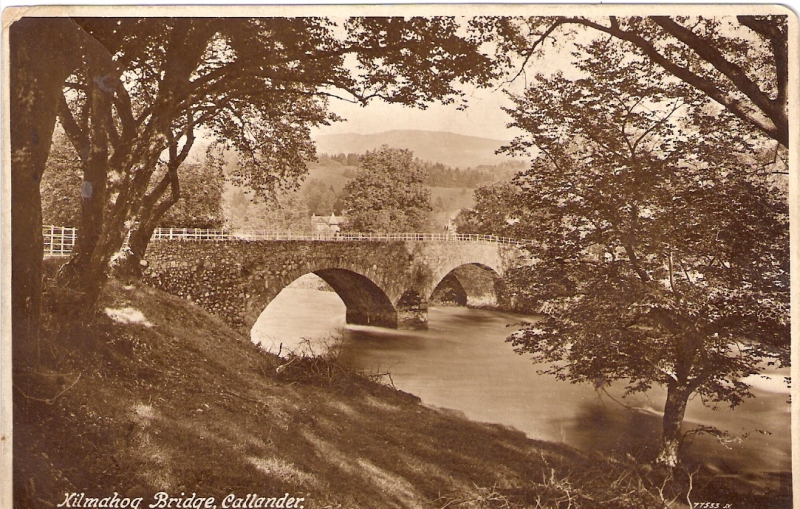 Kilmahog Bridge is a 2 arch, rubble bridge over the Garbh Uisge, just to the E of the Falls of Leny, dated 1777 and built by the mason Peter McInnes from Crieff. Built under the instruction of the Commissioners of Forfeited Estates as part of an improvement scheme to the forfeited estate of the Duke of Perth, Strathgartney Barony, after the 1745 Jacobite uprising. A good example of a well preserved later 18th century bridge.

Kilmahog Bridge was built as part of the improvements to the Barony of Strathgartney which were proposed by John Leslie in his 1775 report on behalf of the Commissioners of Forfeited Estates. In his observations on the estate, Leslie suggests the construction of a bridge either at Gartchonzie or Kilmahog to improve communications, having earlier in the report already suggested a bridge at Gartchonzie. Both bridges were built, and a contract, dated October 21st 1777, was drawn up between James Small (factor of the Perth Estate on behalf of the Commissioners for Forfeited Estates) and Peter McInnes (a Mason in Crieff) for McInnes to build Kilmahog bridge and another of similar design at Gartchonzie (see separate listing). The contract states the following: 'Peter McInnes hereby tends and obliges him to build a bridge over the water at Kilmahog consisting of two arches, conform to a plan thereof made by the said Peter McInnes and signed by him of the date of his signing these presents. All the stones in the pillars and landbreasts to be picked cleering?. And all the fore(sic) corner stones of the pillars to be broached work with an elbow so as no seam may be in that corner. And to build said bridge fifteen feet broad between hem and hem, and the ledges thereof three feet high. And to cope them with a pend, and also to build another bridge at Gartchonzie. Gartchonzie of two arches conform to a plan signed by the said Peter McInnes also of this date and to be made in every other respect as the bridge mentioned.'