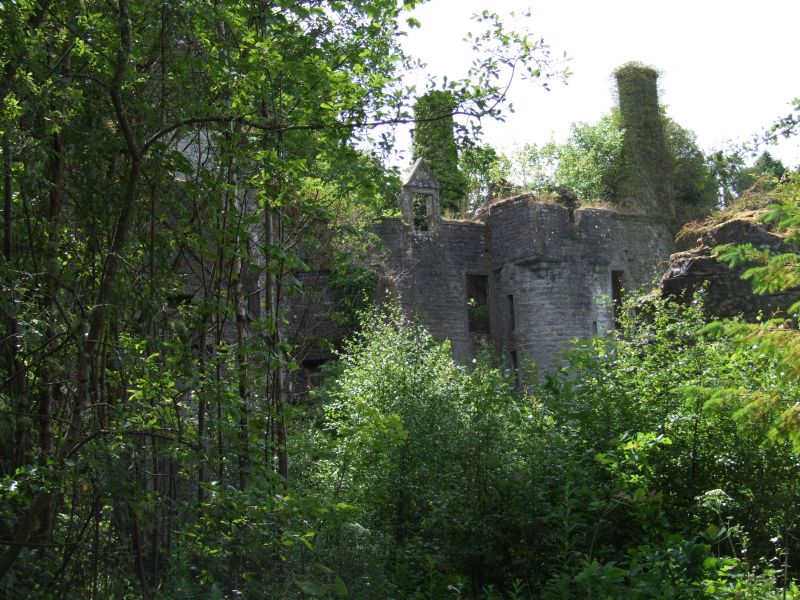 Ruin of large Early Scots Baronial mansion, designed by William Burn, 1852-8. Built for the Duke of Montrose to replace an earlier house which burnt down in 1850. It was became a hotel in 1925 and, and was then used as a military hospital during the 2nd World War. Rudolf Hess was treated here briefly after his plane crash-landed in Scotland in 1941. The roof was removed and the castle partially demolished in 1954. It stands at the heart of a large estate of mid and later 20th century dwellings built on its former garden grounds (see Notes). Buchanan Castle contributes to the landscape and is an example of the work of one of Scotland's most important early-mid 19th century architects. The policies of Buchanan Castle are included in the Inventory of Gardens and Designed Landscapes in Scotland (Vol. 4, 291).

Buchanan Castle was designed by Burn as a large, asymmetrical country house with two courtyards; typical of masions of this period, and particularly of those designed by Burn, the house was designed to accommodate the complex protocol of class and function which was prevalent at that time. The main house was roughly rectangular, with smaller wings projecting to the NW and NE; 2-storey with decorated renaissance style pedimented dormers breaking the eaves, it has bartizan towers to most corners.The entrance (SE) elevation was dominated by a square tower with bartizan towers to the left and a round, conical roofed corner tower to the right.

Although some of the service wings have been demolished, the majority of the walls remain to wall head, as do most of the dormer pediments and bartizans. Some interior walls also remain.

During WWII, when Buchanan Castle was requisitioned for use as a military hospital, a large number of ancillary buildings and wards were built around the house itself. Following the closure of the hospital, the majority of these buildings were sold and converted into dwelling houses.