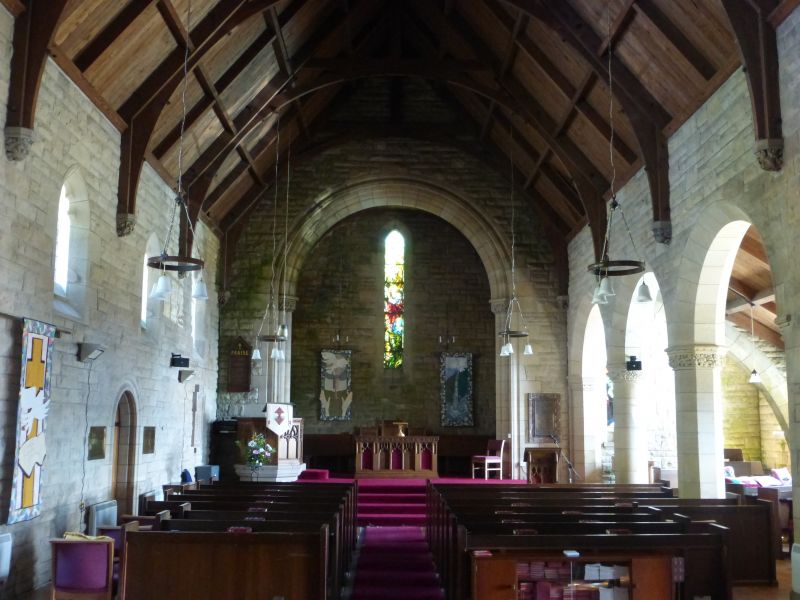 Strone Church, early 20th century with mid-19th century sections, standing prominently on the Loch Long shore, is the work of Peter MacGregor Chalmers, one of the most prolific and well-known church-builders of the early 20th century in Scotland. The church, although relatively simple in form, contains a number of good features, including a mid-19th century tower remodelled by Chalmers and some excellent stained glass by the foremost ecclesiastical glaziers in the West of Scotland.

The first church was built in Strone in 1858-9. This appears to have been a gable-fronted building with a tower to the left and halls to the rear. Of this the 2-stage spired and battlemented tower and the halls (which were extended in the later 19th century) have survived. It is not clear why the existing church was insufficient but in 1907-8 MacGregor Chalmers was commissioned to build a new church. The tower was retained, but a new Romanesque entrance was formed in the base. The nave of the new church is to the rear of the tower, with an advanced gabled transept and a short S aisle. A rectangular chancel projects E. The windows to the original tower are pointed-arched while the 1908 windows are round-headed, cusped and rectangular. The materials from the old church appear to have been re-used on the exterior with Corrie sandstone on the interior.

The halls to the rear are simple - a plain rectangular structure parallel to the church, joined to the main body by a small link building.

Interior: the interior is relatively undecorated, with exposed squared rubble stonework. At the E is a wide round-headed chancel arch, with a single lancet in the chancel - the stained glass of Christ bearing the cross by Stephen Adam Jr.(1908) commemorates Hugh Highgate of Blairmore. In the W gable is a tall triple lancet, with stained glass of Christ entering Jerusalem (1925). Along the nave is a series of cusped lancets, including some stained glass - the best of which is a shepherd by George MacWhirter Webster, 1933. The aisle is separated from the nave by a three-bay arcade, with one circular and one octagonal pier. A moulded round-headed door leads S through the tower and another leads N into the halls. The roof is of arch-braced trusses, terminating in stone corbels with figurative carvings. The marble war memorial was taken from St Andrew's, Kilmun in 1937.

Peter MacGregor Chalmers (1859-1922), a noted scholar of Medieval Architecture is principally known for his prolific output of high quality churches, of which he is thought to have designed 150, including St Margaret's Episcopal church, Great Western Road, Glasgow (from 1908) and St Anne's Parish Church, Edinburgh (1911-13) (both also listed). Many of these churches were in a Romanesque style, usually with tall towers. Chalmers is also notable for the restoration work he carried out, including at St.Andrew's, Paisley and Iona. Within Dunoon and Kilmun parish, Chalmers also recast the interior of Kilmun church (1898-9) and designed Kirn Parish Church (1906-7).

Ecclesiastical Building in use as such.