A Category B Listed Building in Strathearn, Perth and Kinross 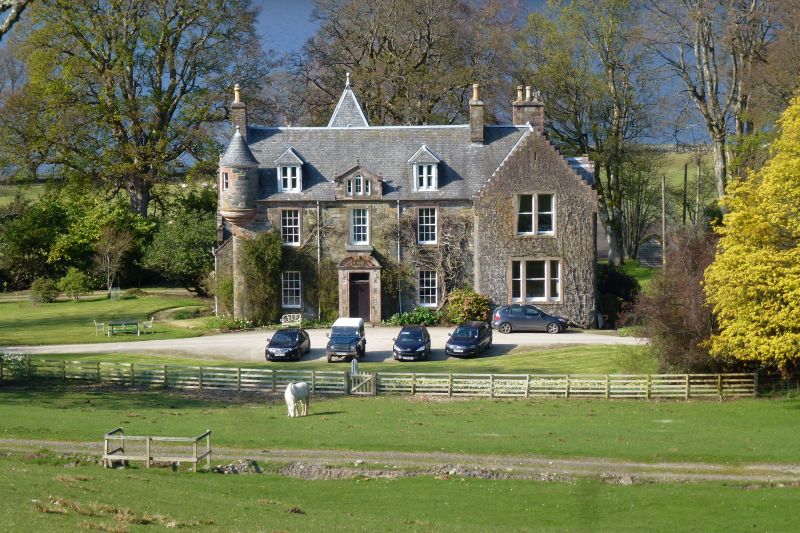 Ardvorlich has been the residence of the Stewart Family since the 16th century. The present house, built 1790 by Robert Ferguson, probably incorporating fabric from an earlier castle, is a good example of a medium-sized formal 18th century house, with additions from throughout the 19th century.

Ardvorlich consists of a 3-bay 2-storey central block, with a central attic gablet. The front (S) elevation has a small corner turret to the left and a substantial gable-fronted addition to the right. 1-2 storey wings project N, around a courtyard closed by a low single-storey range. To the rear of the main block is a square tower with a high piended roof.

It appears that an earlier, stone castle was not fully demolished when the present house was built. The external walls of the 1790 block appear from their size to be of an earlier structure.

The central 3 bays of the present house are the house of 1790. This was modest in size and symmetrical, with a small finialled central attic gablet containing a Venetian window. An early 19th century painting shows this house, with urn finials to the corners. These urns are probably those now found on the gatepiers of the N Gate (see separate list description). A number of later additions were made through the 19th century. The NW wing, consisting of a single storey over basement block with a crowstepped nepus gable decorated with a stepped corbel table, was added in 1839. This is dated, with the initials RS. The NE wing, of slightly later (1840s?), is more modest, with timber gabled dormers. 1890 saw more substantial alterations, carried out by C and L Ower of Dundee, including the crowstep-gabled E wing, with tripartite window on the ground floor and a bipartite above. At this time the corner turrets on the W elevation were also built, as was the tower to the rear. A small stone porch was added to the front elevation. It is also likely that the small dormers on the front elevation also belong to this period.

Interior: a number of features of note survive, although little is of the 18th century. This includes timber joinery, 4-panel doors, plasterwork cornices and timber and marble fireplaces. The main stair has barleytwist timber balusters.

Ardvorlich was fictionalised as Darnlinvarach Castle in Walter Scott's 'A Legend of Montrose.'

B-Group with Ardvorlich Stables and Farm, Walled Garden, Gates and the Bridge over Ardvorlich Burn.