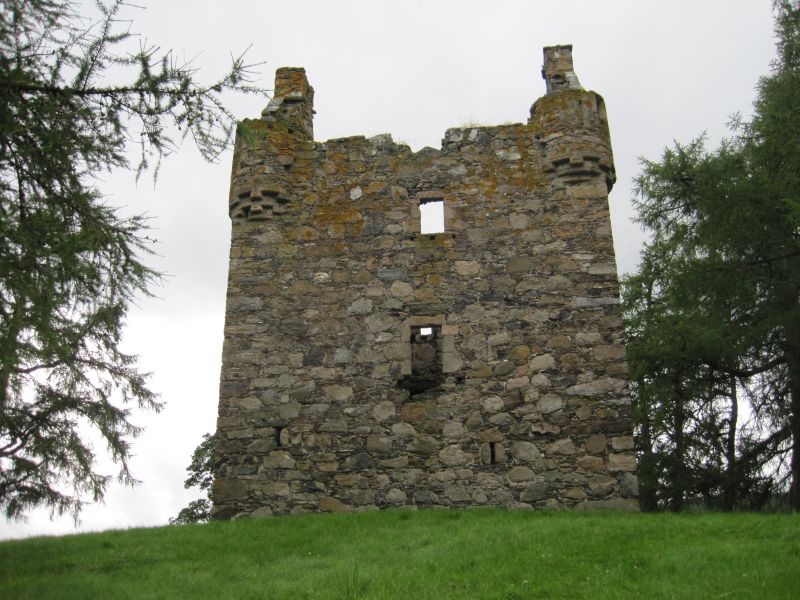 Door at ground to right of S elevation, formerly accessing newel stair to right; remaining elevations blank at ground except for arrowslit windows. Window at 1st floor to left of S and W elevations and at centre to N and E, lighting hall. Double tier of windows at 2nd floor to S elevation, relieving arch above upper window. Window at centre of N and E elevations at 2nd floor and to left of W. Corbelled, gabled caphouse to SE corner with window in gablehead to S. Further attic window to gabled centre bay of E elevation. Corbelled, circular bartizans to NE and NW corners with small windows.

Chimneyheaded gables to E and W and to caphouse. Ashlar coped skews.

Property in the care of the Scottish Ministers on behalf of Her Majesty. Knock Castle is a good example of a minor laird's towerhouse, situated in a prominent position in the landscape. It would have been surrounded by ancillary buildings such as stables, a bakehouse, and a brewhouse. There would have been a hall on the first floor with a vaulted basement, which would have been used as a kitchen. The exact date of construction is uncertain, but is likely to be around the late 16th or early 17th century.

The lands of Knock were owned by a branch of the Gordon family in the 16th century. The family were embroiled in a feud throughout the century with the Forbes family. In 1592, the Clan Chattan raided the area and killed Henry Gordon of Knock. Henry's brother, Alexander, succeeded him and may have built this tower, or he may have rebuilt the upper sections of the previous castle, in order to update it. Tradition states that Alexander fell to his death down the staircase after being overcome with grief when he learnt that a party of Forbes had killed his seven sons. The lands then passed to the Gordons of Abergeldie.

MacGibbon and Ross draw a parallel between Knock Castle and Birse Castle, Aberdeenshire. They note too that the style is late for its period, similar to the keeps of the Borders.