A Category A Listed Building in Lasswade, Midlothian 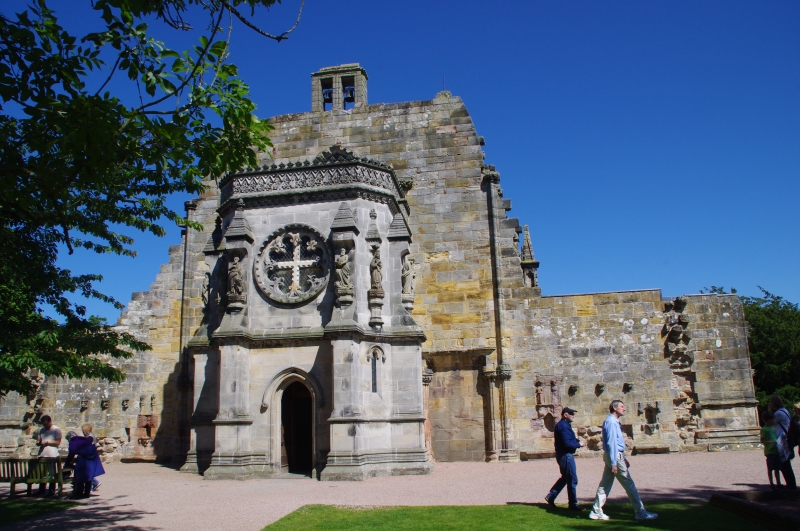 N (ENTRANCE) ELEVATION: 7-bay, grouped 2-5. Moulded round arch with projecting gargoyles in spandrels spanning front face of buttresses at ground in entrance bay to right of centre; architraved doorpiece set back with boarded door; hood-moulded and trefoiled pointed-arched light above; tall window to chancel set back above. Aisle window with chancel window set back above in 2 bays to left of entrance bay with buttresses between. Further aisle window in each bay to penultimate and outer left. Aisle window with cancel window above in bay to right of entrance bay. Blank aisle bay to outer right, a small enclosure formed by adjoining buttress of E transept wall; window to chancel above.

E ELEVATION: single storey projecting 4-bay block with window to each bay and buttresses between below large bipartite window with circular light above to E end of nave. Further projecting single bay sacristy block set at a lower level to outer left; single window to E elevation; flat-roof; joined to the main block by a short, coped sloping wall.

In ecclesiastical use. Established in 1450 by the 3rd Earl of Orkney and Caithness, William Sinclair. Foundations for the entire chapel were laid and uncovered in the 19th century. It was made Collegiate in 1524 by Sir William St Clair of Roslin and, after restoration in 1861-2, was re-opened for worship as the private chapel for the Earls of Rosslyn. The two aisles of the choir, an ambulatory and four subsidiary chapels is reminiscent of the Cistercian form, perhaps influenced by Glasgow Cathedral c1230. The rich sculptural decoration of the interior was once thought to have been the work of masons from Spain or Portugal but research has found that the workforce probably came to Rosslyn on finishing at Borthwick Castle. The carvings are varied in theme and subject and are both religious and secular; they range from mystical animals, complex foliate carvings to religious figural sculpture, (McWilliam identifies each saint and gives details of positioning within the chapel. He also gives details of the dates and subject matter of the stained glass windows). The 'Prentice Pillar', situated at the south-east end of the chapel has acquired significance, due either to the importance of its position in the east end and as part of the entrance to the sacristy below, or to the fairly recent story of the apprentice who carved it and who was subsequently killed by the jealous master mason. It has a reeded core overlain by four strips of foliage that spiral around it for 180 degrees. A monument to the Earl of Caithness who died in 1582 lies to the west end and legend says that 10 Barons of Rosslyn lie in their armour in the burial vault below.