A Category A Listed Building in Sorbie, Dumfries and Galloway 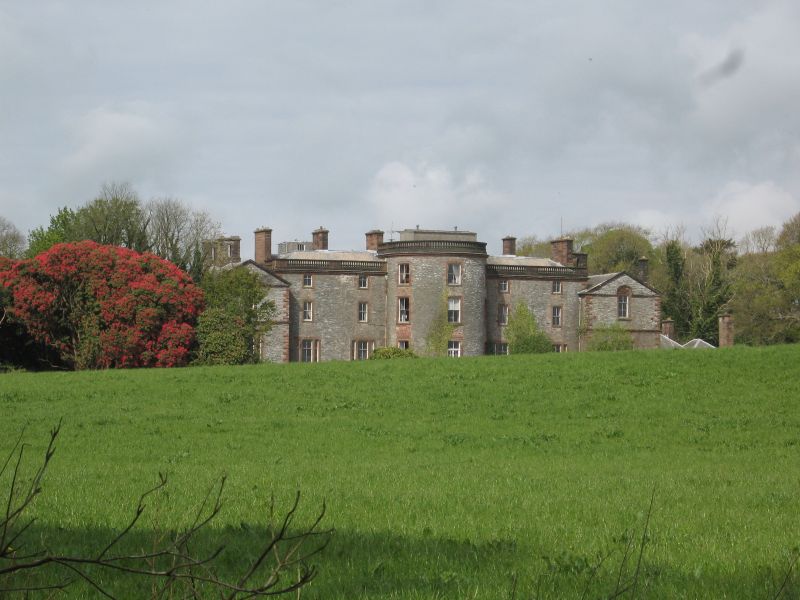 Throughout, piended slate roofs, tall corniced axial and end stacks single or grouped in pairs and linked by a cornice.

INTERIOR: decoration, plasterwork, panelling and chimneypieces of main rooms, hall and stair are mainly the work of Robert Lorimer, 1909-10 alterations with plasterwork by Beattie. Entrance hall is elaborate with scale and platt stair, some balusters retained from original stair, some new tomatch old. Plaster ceiling cornices and roses are expecially elaborate, again in a mid 18th century style. The library survives more or less intact from William Burn scheme, as does the billiard room. The drawing room chinmeypiece is of carved and inlaid marble, probably dating from the early 19th century. False ceiling removed from dining room to reveal decorative vaulted ceiling. Weathervane dial within hall. ARCHWAY AND GATES: To S. Ashlar segmental carriage arch flanked by broad pilasters and giant scroll, with parapet and fine panelled 2-leaf timber gates.

BOUNDARY WALLS: to parkland. Rubble with poloshed red sandstone coping stones. In places walls have been reduced in height but mostly retain their copes. Lodges and walled gardens listed separately.

The Lorimer refurbishment was commissioned by Sir Malcolme McEachern. B Group with the four lodges on the policies which together with the walled garden and gardener's cottage, and Park Cottage, are listed separately. A glazed porch addition to the entrance was removed circa 1987. A modern metal fire escape to W end of pavilion was removed in 1989.