A Category B Listed Building in Mid Argyll, Argyll and Bute 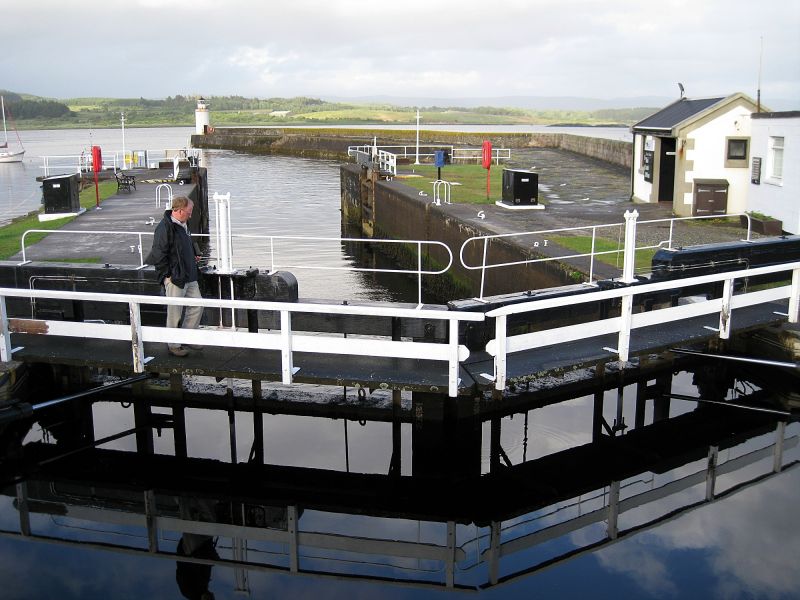 1800 with 19th century alterations. Rubble harbour comprising breakwater and lighthouse, pier and slipway, built to serve and protect the sea-lock entrance to the Crinan Canal at Ardrishaig.

Ardrishaig Harbour is an important integral part of the Crinan Canal ' a landmark sea-to-sea canal on the west coast of Scotland and one of only five surviving canals in country. Begun in 1800, the form of the harbour remains little changed following alterations carried out between 1817 and 1837 under the direction of the pre-eminent Scottish engineer Thomas Telford, including the addition of the breakwater to the south and a larger pier to the north.

The long curving break-water was constructed to protect the sea-lock, canal basin, and boats approaching the harbour pier. The lighthouse at the end of the breakwater is a good, early example of an ashlar stone signal beacon with triangular glazing pattern and iron door and wrought iron railing. It is understood to have been built in around 1880 although a lighthouse is shown at the end of the breakwater on the 1867 Ordnance Survey Map. The harbour pier was extended in the mid-19th century to berth the Clyde steamers that transferred passengers onto the Crinan Canal and it continues in regular use as one of Scotland's main timber transportation links.

The harbour and lighthouse are intervisible and have group interest with the canal basin and the set-piece of canal related buildings at Pier Square including the canal office and the steamer building (see separate listings).

The Crinan Canal was one of more than 50 canals projects approved in Britain between the years 1790 and 1794. This intense period of canal building dramatically increased the opportunities for trade arising from the new industries of the period and decisively ended the situation in which heavy materials could only be moved short distances without the aid of navigable rivers or coastal transport.

Taking its name from the village at its north-westerly end, the canal is 14 kilometres long, rising and falling through 15 locks. It was built to stimulate trade between the Clyde area and the Inner Hebrides by avoiding the 130 kilometre journey around the Kintyre peninsula. The canal transported numerous freights, particularly slate from the north, coal from the south and services including postal and passenger traffic.

The Crinan Canal is renowned for its striking landscape and scenic variation over its relatively short length. The canal-side buildings are largely 19th century with simple detached cottages defining the small number of settlements along the route. The canal had a long and troubled development history with shortages of labour, building materials, structural issues and related financial concerns. The perseverance needed to complete and continue to maintain the canal despite these set-backs, amid the evolving industrial and commercial landscape of the 19th century, are part of the canal's significance.

Engineer James Watt had surveyed possible routes for the canal as early as 1771. James Rennie proposed an alternative route in 1793 and work began the following year, with the canal opening to traffic in 1801. Under the advice of pre-eminent Scottish engineer Thomas Telford, a major refurbishment of the canal was undertaken in 1817, funded by the Government. Telford's recommendations resulted in a complete overhaul at a cost of over 18000 pounds. Substandard stonework, lock gates and bridges were repaired or replaced, banks were raised, bends straightened and rocks removed to level the canal bed. The canal effectively came into public ownership after these works were complete.

Traffic through the Crinan increased considerably after the opening of Telford's Caledonian Canal in 1822. Using both canals, boats could now travel from Glasgow to Inverness. Queen Victoria navigated the Crinan Canal in 1847 and passenger steamer companies were quick to advertise a 'Royal Route'. By 1866 a specially designed Canal steamer called The Linnet was introduced to help cope with the increasing passenger numbers. The Linnet remained in service for the next 65 years. Between 1930 and 1932, new sea locks were built at either end of the Crinan Canal, making it accessible at any tide. The Canal has continued to operate as a centre for tourism in the area into the 21st century with around 2000 yachts, fishing boats and pleasure cruisers travelling through its locks each year.