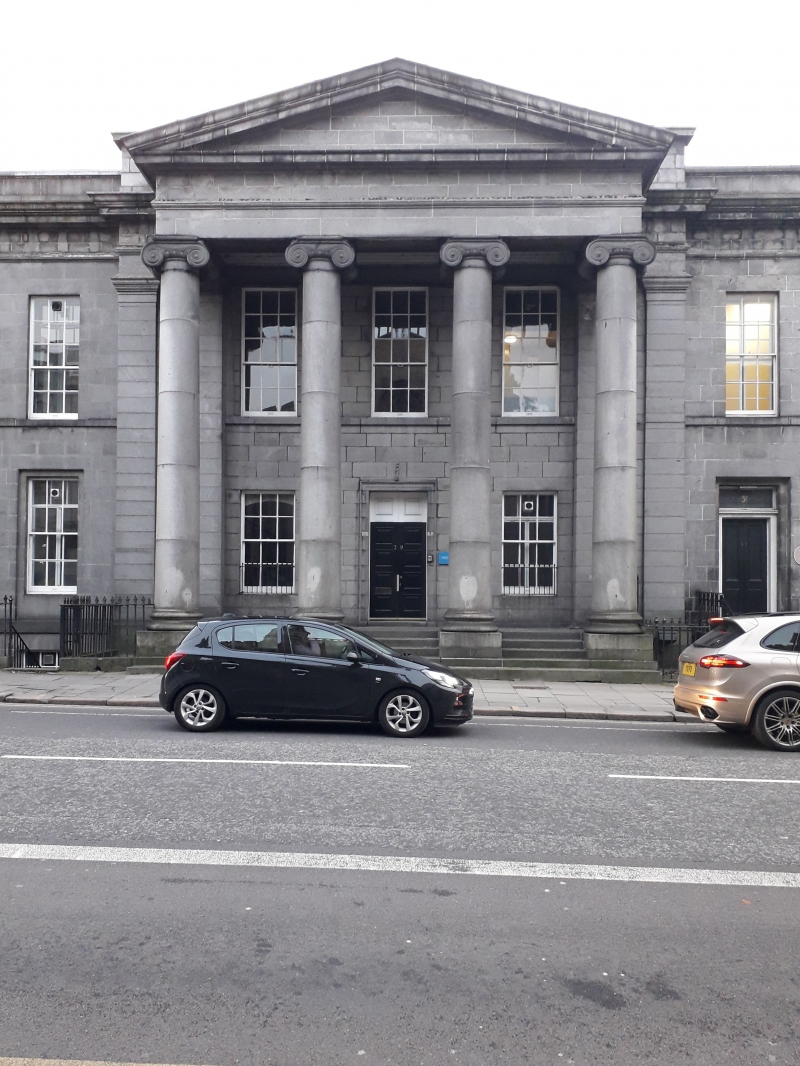 Nos 27, 29 and 31 King Street form a crucial and important row at the beginning of King Street and are a critical part of the 19th century planned streetscape of Aberdeen. Despite three different architects and three different dates, the buildings form a coherent design and assume the appearance of one building with a central classical portico and two wings, and a separate building to the far left.

The Medico-Chirurgical Hall (No 29), with its dominant giant Ionic portico was the first building on this side of King Street and was the first important granite design by renowned architect Archibald Simpson. It is a good example of Greek Revival architecture and forms the crucial determiner of the subsequent surrounding architecture. In order to assure its dominance and importance in the streetscape, the feus for the land on either side of the building had a condition that they would be set back from the line of the Hall.

No 27 ( the former County Records Office) was built to a particularly inventive design as Smith created a structure in two distinct sections, one forming the apparent left wing to the nos 29 and 31.

Built as a private residence for the advocate and Lord Provost of Aberdeen, John Webster, No 31 King Street was added to the North side of the Medico-Chirurgical Hall in 1840. Although the building has had some internal alteration due to change of use, it still retains a good proportion of its original room plan and some very good decorative cornicing and plasterwork. From 1956-1968 it was used as a children's theatre.

The Medico-Chirurgical Society was founded in 1789 as the Aberdeen Medical Society by 12 doctors. Founded 'for their mutual improvement in prosecuting their studies by holding weekly meetings', the Society changed its name in 1811. The Hall was built to house the valuable collection of books that the members had accumulated.

For a further description on the development of King Street, see Notes for 7 and 9 King Street.

Archibald Simpson (1790-1847) and John Smith (1781-1852) were the primary architects involved in designing the expanding nineteenth century city of Aberdeen. Simpson, a native of Aberdeen, practised predominately in the North East of Scotland. He designed many of the important works in the city. Smith established himself in architectural practice in the city in 1804. He became the Master of Work in 1824 and designed many of Aberdeen's public buildings, showing an expertise in working with granite.