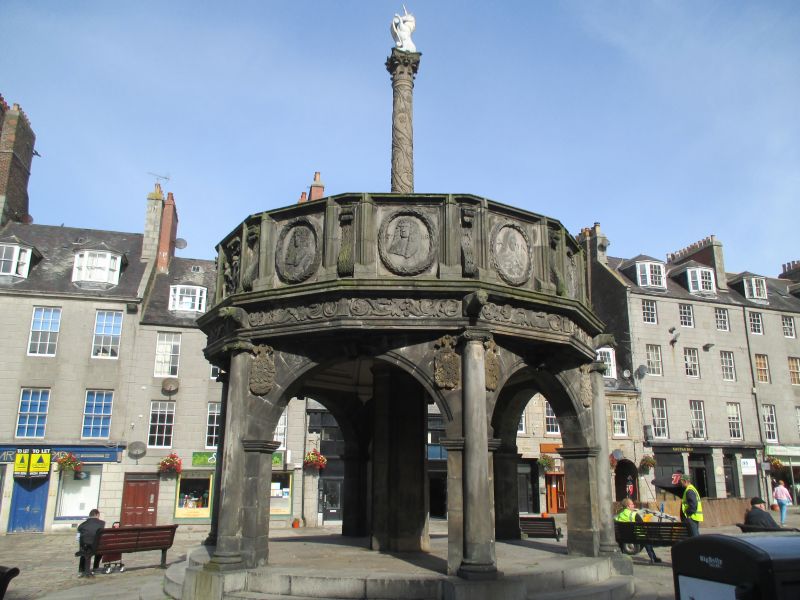 This is a particularly fine and impressive largely 17th century Mercat Cross situated in the heart of the Castlegate. It is of significant streetscape value and is the physical symbol of the centre of Aberdeen city. The Cross is richly decorated with good quality carving on both the parapet and the column. The parapet carving consists of Arms of the Crown and City, and oval-framed bas-reliefs of the Stuart monarchs from James I to James VII. The 1995 column is carved with thistles and roses.

Originally positioned slightly to the West of its present position, this cross was moved into its present location in 1842. Constructed in 1686 by the mason John Montgomery of Old Rayne, the base was altered in 1821 to provide one large booth, in place of the previous smaller ones. This work was completed by a John Small at the cost of £350. Lord Cockburn wrote in 1841 that he thought this was the 'finest thing of its kind in Scotland'.

In 1995-6 the column was replaced and the 17th century original is currently held in the Tolbooth museum.

Established from the 12th century, market crosses were traditionally the symbol of a burgh's right to trade and were placed at the centre of a town's market place. They were also the place where important announcements were made and where public punishments were applied.