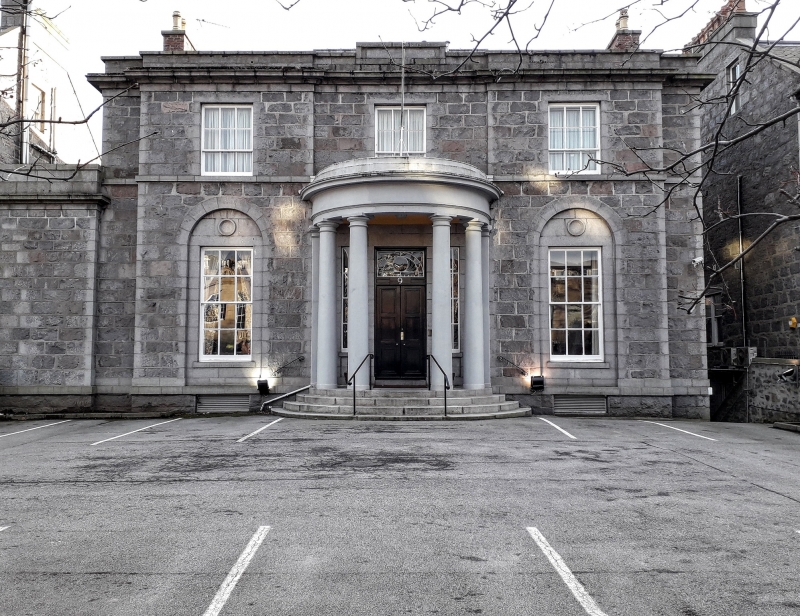 Albyn Place was originally built on the lands of Rubislaw, owned by James Skene. Skene lived in Albyn Place in Edinburgh (hence the same name in Aberdeen), and commissioned Archibald Elliot to prepare a scheme for Aberdeen based on the New Town in Edinburgh. Albyn Place was the only part of Elliot's scheme to be executed, the remainder being remodelled by Archibald Simpson just over a decade later, and again in the 1840s. 9 Albyn Place, which seems likely to have been designed by Simpson, who also designed the nearby Harlaw Academy, 28 Albyn Place and probably some of the other houses on the street (see separate listings). The columned porch is a slightly later addition, with columns of Cruden Bay brick. The house originally had 2 wings to E and W, that to the W has since been removed. The house was owned by Professor Theodore Cash in 1898, then by William Clark Souter, who sold it to the trustees of the Royal Northern Club in 1948 (the RNC amalgamated with the University Club in 1979 to form the Royal Northern and University Club), in whose ownership it remains. Some of the fittings from the clubs previous building at 1 Albyn Place, notably the impressive fireplace in the dining room, were brought to 9 Albyn Place. Despite the enlargements in the late 20th century, 9 Albyn Place is a remarkably complete example of an early villa built as Aberdeen expanded westwards in the 19th century.