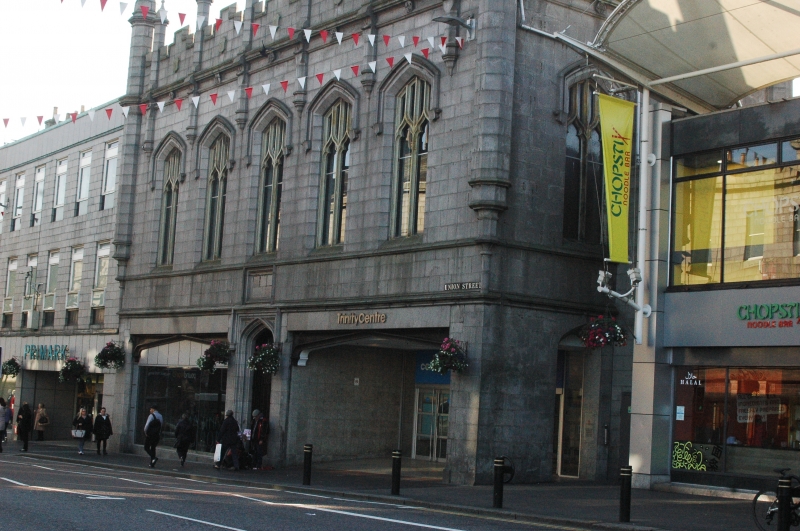 The first building in Union Street not to be built in the classical style, this is a distinctive and prominent building which contributes significantly to the streetscape. Designed by the celebrated architects John and William Smith, it is situated at the South East corner of Union Bridge and is a particularly striking termination to the South side on Union Street. There are subsequent surrounding modern 20th century additions, but the building still retains a distinctive and unusual quality. It was built for the Seven Incorporated Trades, a body formed in the 16th century to protect the rights and privileges of traders and was a replacement for an earlier building on a different site, which was subsequently demolished. The entrance door of the old Hall was transferred to the new, and parts of this may still remain in the interior. By the 1840s, the Seven Incorporated Trades had become a charitable and social organisation.

John Smith (1781-1852), was a native of Aberdeen, who established himself in architectural practice in the city in 1804 and whose father William, was also an architect and building in Aberdeen. John became the Master of Work in 1824 and designed many of Aberdeen's public buildings, showing an expertise in working with granite. With Archibald Simpson, (1790-1847), he was one of the major architects involved in designing the expanding nineteenth century city of Aberdeen. This building earned him the title 'Tudor Johnnie'. William (1817-1891) was his son, who became a partner in his father's practice in 1845. Trinity Hall was his first commission. The Tutor Gothic design was reputed to have impressed Prince Albert sufficiently that he appointed William Smith as architect for Balmoral Castle.

Union Street was developed after 1794, when a town council meeting asked the engineer Charles Abercrombie to find a way to connect the original steep, haphazard network of Medieval streets of Aberdeen to the surrounding countryside. His plan was for two streets, one of which would run from Castlegate to the Denburn and the other which would run from the Castlegate to the North of the town. The former became Union Street. This was a particularly difficult project to complete as the street had to cut through St Katherine's Hill at the East end and be built on a series of arches culminating with a large bridge at the Denburn. The street was to be lined with classical buildings, but the initial idea of having a long, uniform classical design that each new house would have to conform to was abandoned, as it was realised that different purchasers would require some control over the design Some variety was therefore conceded.