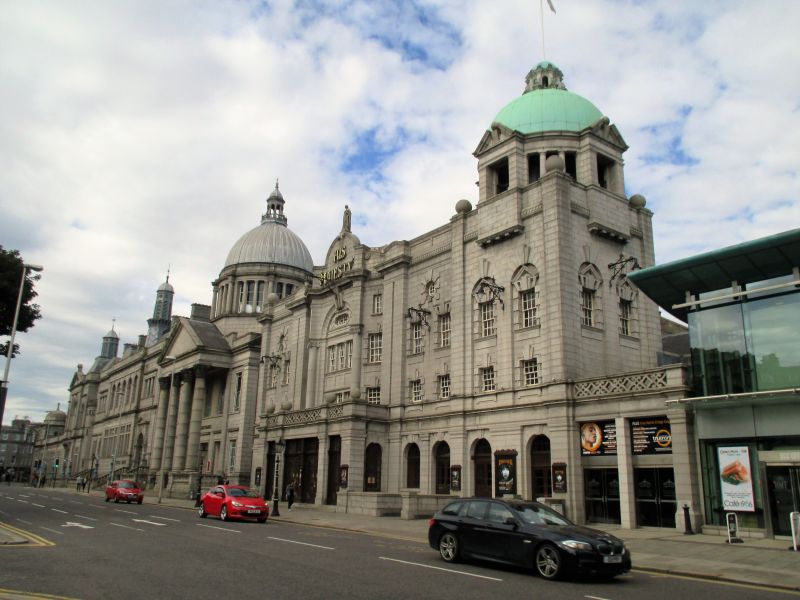 Multi-pane glazing patterns in timber sash and case windows; much coloured glass throughout.

The very high quality of design exhibited at His Majesty's Theatre is supported by an outstanding interior in almost original condition. It is an important work by the renowned theatre architect Frank Matcham. The building contributes significantly to the streetscape with the strong visual impact of the iconic façade owing much to its elevated position on Rosemount Viaduct overlooking Union Terrace Gardens, with a steep drop behind to the Denburn Valley.

Originally designed in 1901 with two small towers flanking a centre pediment, the final design has a single much larger dome, possibly to balance the dome on the nearby church. The building, which cost £35,000, was complete by 26 November 1906. The opening show on 3 December was a pantomime, Sweet Red Riding Hood, which played to a full house. After the show Mr Robert Arthur, who had written a complementary booklet entitled The Playhouse of Bon Accord told the audience "This is an Aberdeen playhouse built by Aberdeen workmen and is a credit to their handywork". At that time "the backstage accommodation was of the highest standard. A wide stage, running from the proscenium to the back wall, was graced by an onstage paint frame with a glazed sloping roof. The flying grid, with forty-two sets of lines of hemp rope, towered some sixty feet above the stage. A tall scenery dock door at stage level alongside the property store allowed easy access for awkward scenery arriving from the Schoolhill Station next door. Twelve dressing rooms at the Prompt Side of the stage..." (Swan, pp39-40).

After passing into Local Authority ownership, the 1974 Health & Safety Act led to necessary changes and in 1980 the theatre closed for refurbishment. New technical equipment was introduced and the auditorium was redecorated, seats were re-padded and repositioned and a new chandelier designed by Peter Rice was commissioned from the Royal Opera House workshop. Other changes included new lettering above the main door and replacement of some 200 panes of stained glass. HRH the Prince of Wales re-opened the building on 17 September 1982. His Majesty's was again closed for refurbishment and extension in 2005 at a cost of £7.8 million.

Prolific theatre designer Frank Matcham trained in Torquay before joining Jethro T Robinson in London and he took over the firm in 1878. Swan states that "he developed a very personal style that is instantly recognisable. He was a supreme example of the unacademic architect who became a master of his craft". Matcham kept costs under control and was technically skilled. He took out patents on lifts and concentric cantilevers for theatre balconies.