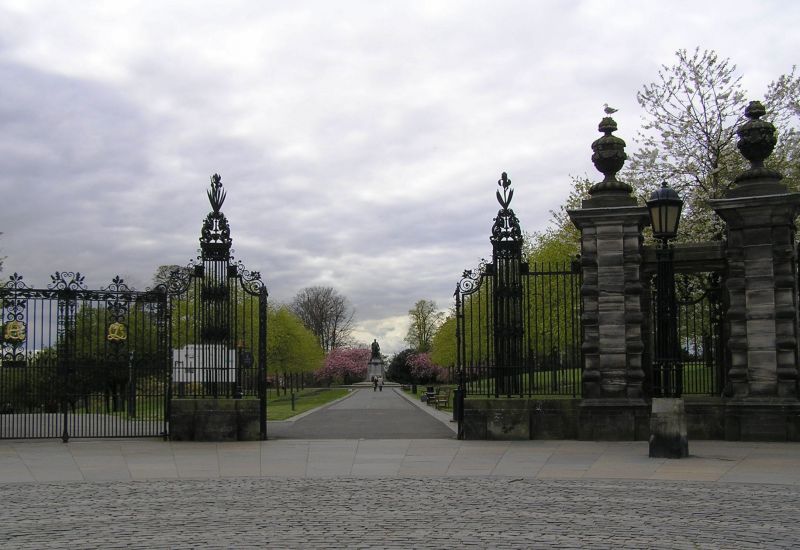 3 pairs of gates to centre; each decorated with wrought-iron flowers, fruit, foliage and scrolls; those to centre incorporating intertwined initials AC and LC (Andrew Carnegie and Louise Carnegie). Gate stanchions curve upwards to cage-like square-plan wrought-iron gatepiers; both with scrolled decoration; piers surmounted by scrolls with plant finials. Flanking pairs of square-plan piers with alternating pulvinated bands and central pilaster; frieze surmounted by moulded cornice; surmounting urns decorated with festoons; piers linked by lintel below frieze; wrought-iron panel with thistle finial in between. Identical arrangement, separated by railed wall (scrolled panels to railings) to either side. Curved section of wall (with lamp on wrought iron support) to outer right adjoins further pair of piers, identical to 1st without intervening lintel, at right angles to previous pair. Similar arrangement to outer left; except curved section of wall (with lamp) adjoins pair of piers set back slightly; that to left is smaller with plain shaft and moulded cornice surmounted by squat urn with obelisk-like finial; piers linked by lintel with wrought iron panel with thistle finial below. Identical arrangement in reverse to other side of railed recess (with steps up to it and scrolled panels to railings). Curved section of wall (with lamp) adjoins single pier with alternating pulvinated bands and festooned urn. Section of wall to outer left adjoins gable end of adjacent building and projects forward at right angles to meet street.

LAMP STANDARDS: pair of these on chamfered stone pedestals stand one on either side of triple gates. Each has wrought-iron cage-like post decorated with scrolls surmounted by octagonal-plan lanterns.

Incorporating outstanding earlier 20th century ironwork, this imposing gatepiece is now known as the Memorial Gateway although it was in fact erected while Mrs Carnegie was still alive. Pittencrieff House and its grounds were bought by Andrew Carnegie in 1902. The grounds were opened as a public park the following year and are included in the Inventory of Gardens and Designed Landscapes (see above). Thomas Hadden was well known for his decorative smithwork, particularly through his collaboration with the architect, Robert Lorimer. Amongst other high-profile work, he was responsible for the screens in Lorimer's Thistle Chapel in St Giles Cathdral in Edinburgh. See separate List descriptions for other park buildings, including East Gateway.