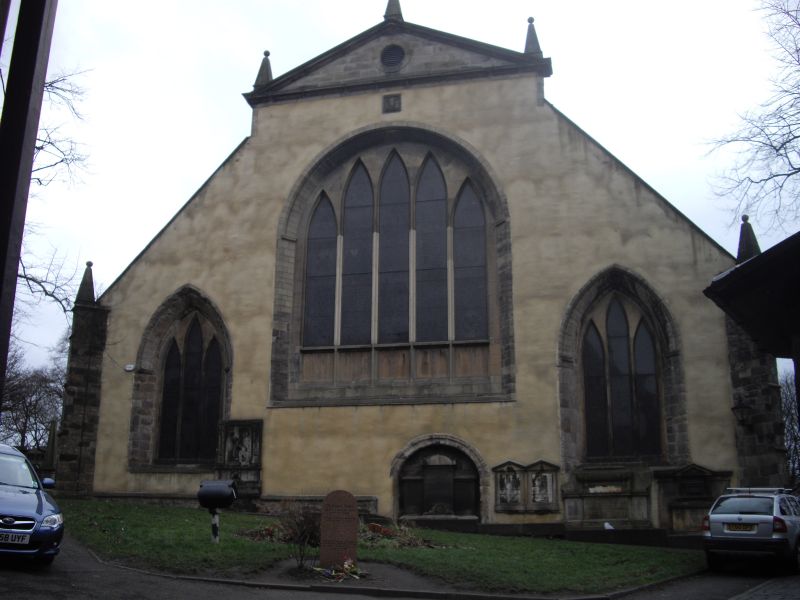 A group comprises Greyfriars Church and Greyfriars Churchyard. The church was built in the grounds of the former Franciscan Friary (dissolved 1559), which had been used as a burial ground from 1562; it is said to incorporate material from the former nunnery of St Catherine of Siena (Sciennes). The Masters of Works were Clement Russell (1602), then Patrick Cochrane (1603-4). Greyfriars was the 1st church to be built in Edinburgh after the Reformation, serving the SW district of the city; its congregation moved from St Giles. The National Covenant was signed in Greyfriars on 26th February 1638. The building was used as a barracks by Cromwell's troops, 1650-53 (interior and furnishings were destroyed). Gunpowder stored in the tower exploded in May 1718, destroying the tower and damaging the 2 W bays. A fire in January 1845 gutted Old Greyfriars, causing arcades to collapse, and damaging New Greyfriars. Wilson illustrates the E end before the fire. New Greyfriars was re-opened in 1846 with furnishings by David Bryce; Old Greyfriars restored by David Cousin, 1856-7. The Congregations united in 1929, and the 2 churches were joined by Henry Kerr in 1931-8. Stained glass (the first in an Edinburgh Presbyterian church since the Reformation), mainly by Ballantine and Allan (1857), remained largely unaltered. The memorial in the S aisle was brought from Lady Yester's Church in 1938.