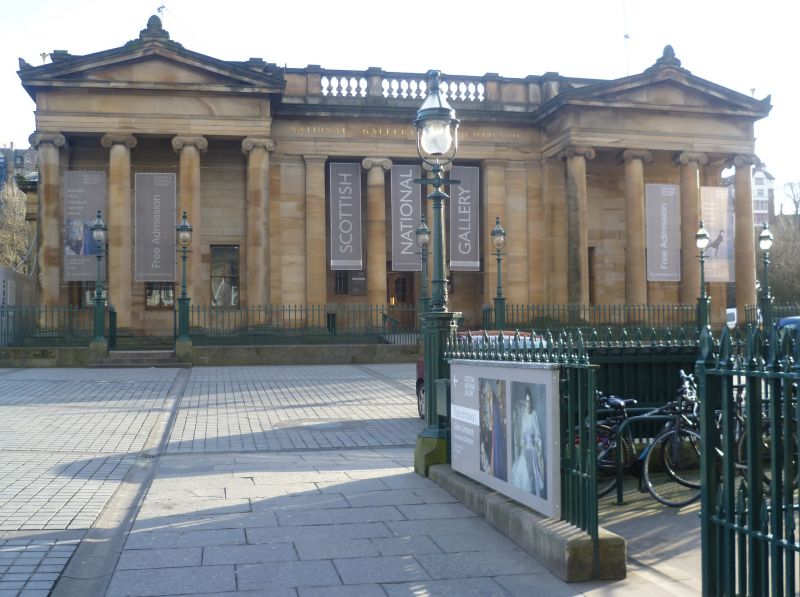 Listing Name: 1 the Mound, National Gallery of Scotland with Railings

INTERIOR: 2 ranges of top-lit lozenge-shaped and octagonal galleries. Corinthian-columned screens between galleries. Curved stairs to N and S to galleries at upper level.

Foundation stone laid by Prince Albert 30th August 1850. Funded by the Treasury and the Board of Trustees, a large part of the site being given by the City at a nominal cost. Twin porticoes to N and S reflect the building's original dual function, divided longitudinally to accommodate the exhibition galleries of the RSA to E and the National Gallery permanent collection to W. Cost constraint was a factor in the unadorned style of the building. In 1912 the RSA galleries moved to the former Royal Institution building to N (separately listed). Internal alterations were made by WT Oldrieve in 1911-12. A railway tunnel runs under the building. In 1970 additional galleries were constructed in the basement to SE. An underground link to the former RSA building, which will provide access from East Princes Street Gardens, a cafe, lecture theatre and bookshop is under construction (2001).