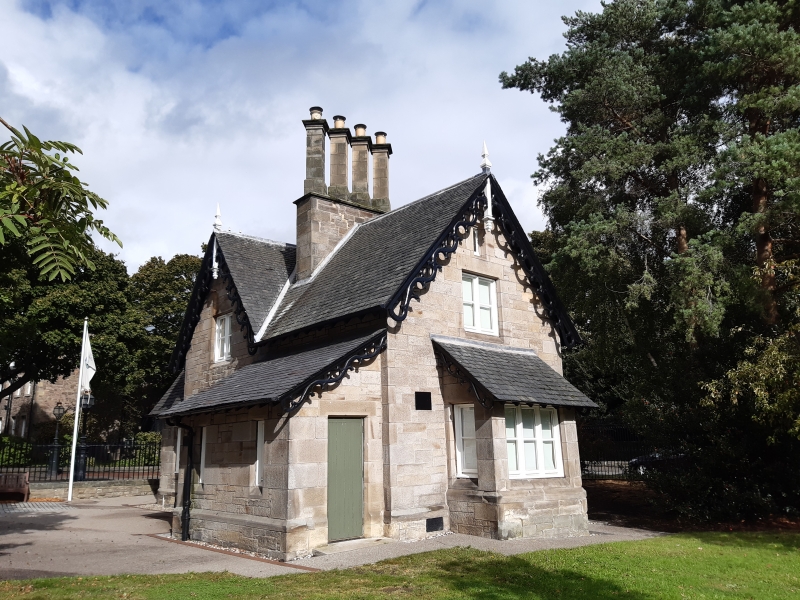 The diamond flues and decorative bargeboarding of this lodge add significantly to the character of Holyrood Park. Positioned at the Holyrood Palace entrance, it is the earliest of the purpose-built lodges to the Park and they all share a similar distinctive gabled, picturesque style. Prince Albert instigated the landscaping of the Park from 1855-8 and four Lodges positioned around the Queen's Drive clearly demarcate the distinct parkland area of Holyrood Park from the surrounding city. The other lodges are Meadowbank, Duddingston and St Leonard's Lodges (see separate listings). The Lodges were designed by Robert Matheson, the Clerk of Works for Scotland, who carried out a programme of gradual improvements to the Palace, the Park and the Abbey Precincts at the request of Queen Victoria. These improvements included designing the Lodges for the entrances to the Park and the fountain in the forecourt of the Palace.

The grounds known as Holyrood Park had been associated with the Scottish royal household since the 12th century, and were extended to roughly their present boundaries in 1541-2 by James V. The rights of the Earl of Haddington as hereditary keeper of the Park were bought out in 1843, after Queen Victoria's first visit to the Palace in 1842, bringing it again under Royal control. In 1855-8, at the instigation of Prince Albert, plans were drawn up for the landscaping of the Park. Bogs were drained, Dunsapie and St Margaret's Lochs were formed, the Queen's Drive (originally Victoria Road) was constructed, and lodges built by Robert Matheson, who also executed work at Holyrood Palace during the same period. Albert also intended to build a rustic thatched restaurant at Dunsapie Loch, but this plan was abandoned in the face of stout public opposition. With the exception of the occupied buildings, including the lodges, the Park is scheduled under the Ancient Monuments and Archaeological Areas Act 1979.

It should be recognised that significant below-ground archaeological remains may survive here as part of and in addition to the structures and features described above.