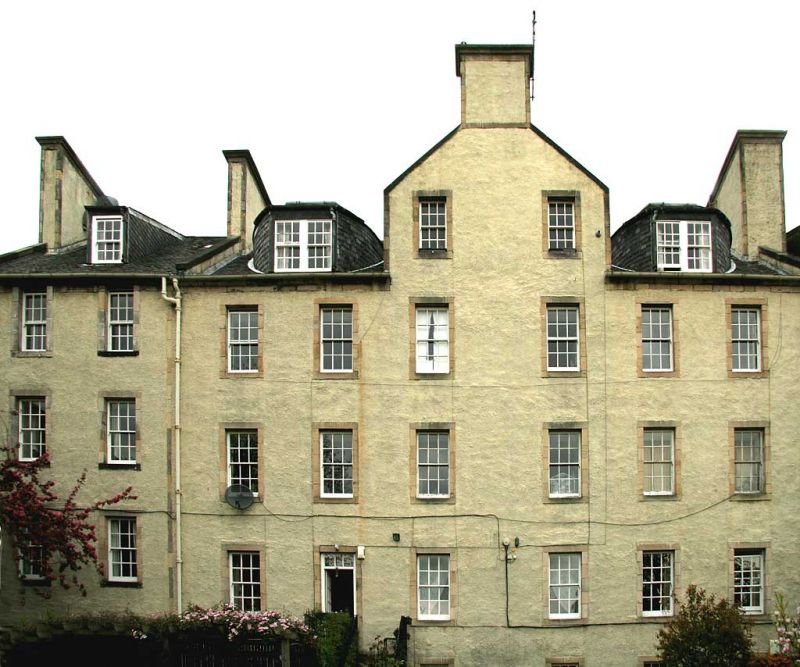 Nos 3-6b Chessel's Court (South Block) is an outstanding and rare survival of a traditional 18th century Edinburgh 'mansion style' tenement. Occupying the key position on the Southside of the court, it was originally built to provide better accommodation for relatively wealthy residents within the confines of the Old Town. The building is notable for its quality interior details including Rococco chimneypieces, over-mantels and original cornicing. Archibald Chesil was an Edinburgh wright (master-carpenter) of some local standing and the building probably followed his own designs quite closely. Wings were added to the building around 1765 projecting from each side to form a U-plan.

In response to the practice of wholesale slum-clearances advanced in the 1867 Improvement Act, the building was purchased by Patrick Geddes (see below) to prevent its demolition. It was restored 1963-5 as part of the initial phase of Robert Hurd and Partners' Canongate regeneration scheme. Together with the W block - Nos 1 and 2 Chessels Court and the N block - Nos 242 and 244 Canongate (see separate listings) they acted as a 'test case' model for further systematic restoration of the area by Robert Hurd and other architects. On completion, the Chessel's Court scheme provided 82 houses, 1 school and schoolhouse, 4 shops, 1 public house and further office space, using a wide range of restoration philosophies (within the scope of a limited housing fund budget) to achieve a unified scheme.

The historic and architectural value of Edinburgh's Canongate area as a whole cannot be overstated. Embodying a spirit of permanence while constantly evolving, its buildings reflect nearly 1000 years of political, religious and civic development in Scotland. The Canons of Holyrood Abbey were given leave by King David I to found the burgh of Canongate in 1140. Either side of the street (a volcanic ridge) was divided into long, narrow strips of land or 'tofts'. By the end of the 15th century all the tofts were occupied, some subdivided into 'forelands' and 'backlands' under different ownership. Fuedal superiority over Canongate ceased after 1560. The following century was a period of wide-scale rebuilding and it was during this time that most of the areas' mansions and fine townhouses were constructed, usually towards the back of the tofts, away from the squalor of the main street. The 17th century also saw the amalgamation of the narrow plots and their redevelopment as courtyards surrounded by tenements. The burgh was formally incorporated into the City in 1856. Throughout the 19th Century the Canongate's prosperity declined as large sections of the nobility and middle classes moved out of the area in favour of the grandeur and improved facilities of Edinburgh's New Town.. The Improvement Act of 1867 made efforts to address this, responding early on with large-scale slum clearance and redevelopment of entire street frontages. A further Improvement Act in 1893 was in part a reaction to this 'maximum intervention', responding with a programme of relatively small-scale changes within the existing street pattern. This latter approach was more consistent with Patrick Geddes' concept of 'conservative surgery'. Geddes, a renowned intellectual who lived in the Old Town, helped pioneer the modern conservation movement in Scotland which gathered momentum throughout the 20th century. Extensive rebuilding and infilling of sections of the Canongate's many tenements took place, most notably by city architects, E J McRae and Robert Hurd (mid 20th century) with some early frontages retained and others rebuilt in replica.

Prior to resurvey, the collective statutory address for the S, W and N blocks at Chessel's Court was 'CANONGATE 240 CHESSEL'S COURT'. The three buildings were listed individually at resurvey in 2007/08.