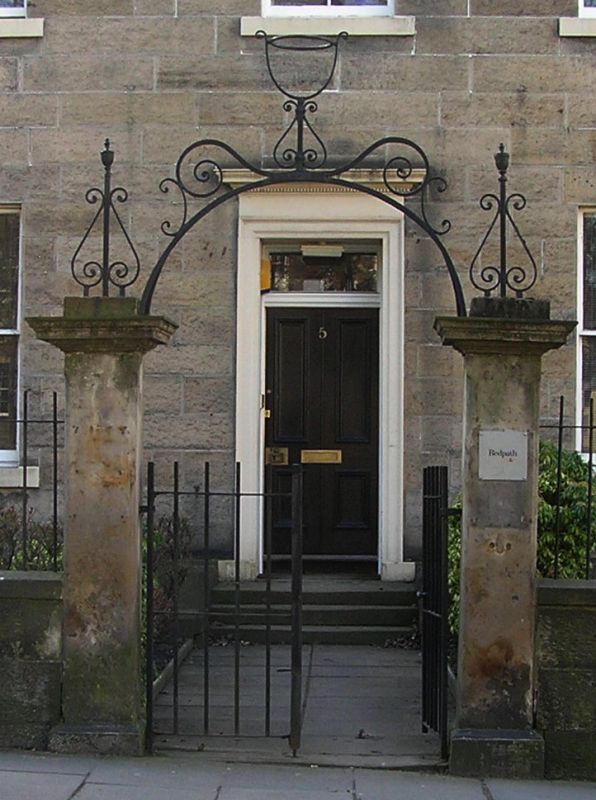 1790-1800. Classical, near-symmetrical, 4-bay, 2-storey and attic semi-detached villa. Droved ashlar with polished quoins and cills (coursed, squared rubble with droved quoins and margins to side and rear). Base course; eaves cornice. Long and short quoins (raised to principal elevation). Predominantly regular fenestration to front; irregular fenestration to side and rear.

NE (PRINCIPAL) ELEVATION: steps up to timber-panelled door with letterbox fanlight and architraved and corniced doorpiece to inner left bay. Canted dormer to roof to left.

The simple elegance of this small house emphasises its importance as an early example of the semi-detached suburban villa in Edinburgh. It also has streetscape and historical value as an element of the Gayfield estate development.

It is possible that 5 Gayfield Square was designed by the architect Alexander Laing; an advert in the Edinburgh Evening Courant in 1791 proclaimed that Laing was selling a villa in Gayfield Square, but did not specify which one. In 1820, Laing himself was living at 6 Gayfield Square (see separate List description). It therefore seems likely that Laing designed at least one, and possibly all, of the villas on the south side of Gayfield Square.

5 Gayfield Square forms part of the Gayfield Estate, so called because it stands on the former grounds of Gayfield House (East London Street; 1763-5, still extant; separately listed Category A). These lands were feued by the solicitor James Jollie from 1785. Building began on either side of the drive to the house; the building line on the SW of Gayfield Square marks the edge of the drive. These developments began to establish the form of Gayfield Square, which forms the heart of the estate. It was part of Jollie's plan from the beginning that this should be so; in January 1783 he advertised that the Gayfield grounds were to be feued for building purposes 'according to a plan.' His advertisment promised prospective feuars 'remarkably pleasant' rustic situation and 'uncommonly beautiful views' in addition to 'the privilege of the area of the square'. Sasines record that '..the area of Gayfield Place [is] to remain an open space for all time coming.'

5 Gayfield Square was at one time the home of Kincaid MacKenzie, Lord Provost 1817-19. It was here that he entertained, during his term of office, the Grand Duke Michael of Russia and Prince Leopold, the future King of Belgium and uncle of Queen Victoria.