* and 8B Gayfield Square, Edinburgh 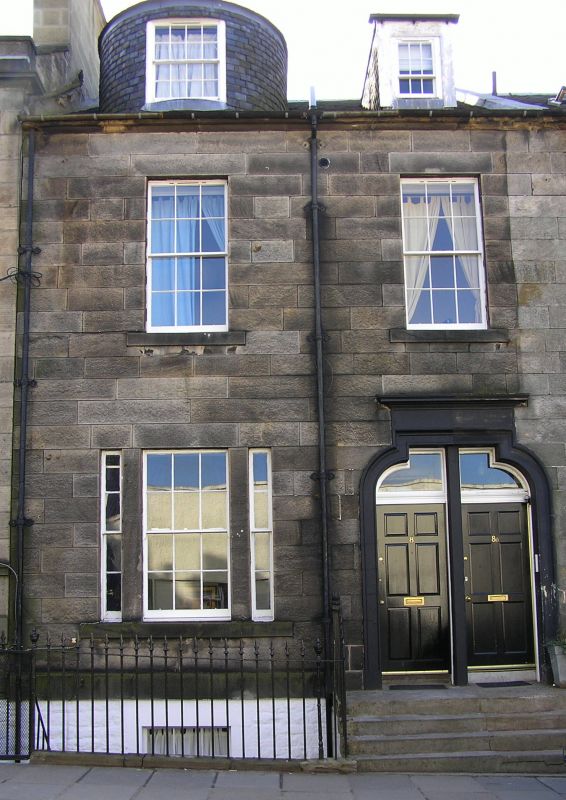 Listing Name: 8, 8b and 9 Gayfield Square Including Railings

The simple elegance of this small house emphasises its importance as an early example of a terraced suburban villa in Edinburgh. It also has streetscape and historical value as an element of the Gayfield estate development.

The shouldered doorway to No.8 and 8A is an alteration resulting from a later 19th century subdivision of No. 8; it is likely that these alterations included the construction of the additional storey to the rear to provide additional accommodation. The cornice and lintel of the altered doorpiece match that of the original doorpiece of No.9, indicating that when the doorway was altered to form two separate entrances, the original cornice and lintel were retained. The unusual shouldered form of the doorpiece facilitated the combination of the newly widened opening and the narrower original features.

8-9 Gayfield Square forms part of the Gayfield Estate, so called because it stands on the former grounds of Gayfield House (East London Street; 1763-5, still extant; separately listed Category A). These lands were feued by the solicitor James Jollie from 1783. Building began on either side of the drive to the house; the building line on the SW of Gayfield Square follows the line of the drive. These developments began to establish the form of Gayfield Square, which forms the heart of the estate. It was part of Jollie's plan from the beginning that this should be so; in January 1783, he advertised that the Gayfield grounds were to be feued for building purposes 'according to a plan' His advertisement promised prospective feuars 'remarkably pleasant' rustic situation and 'uncommonly beautiful views' in addition to 'the privilege of the area of the square'. Sasines record that '..the area of Gayfield Place [is] to remain an open space for all time coming.'