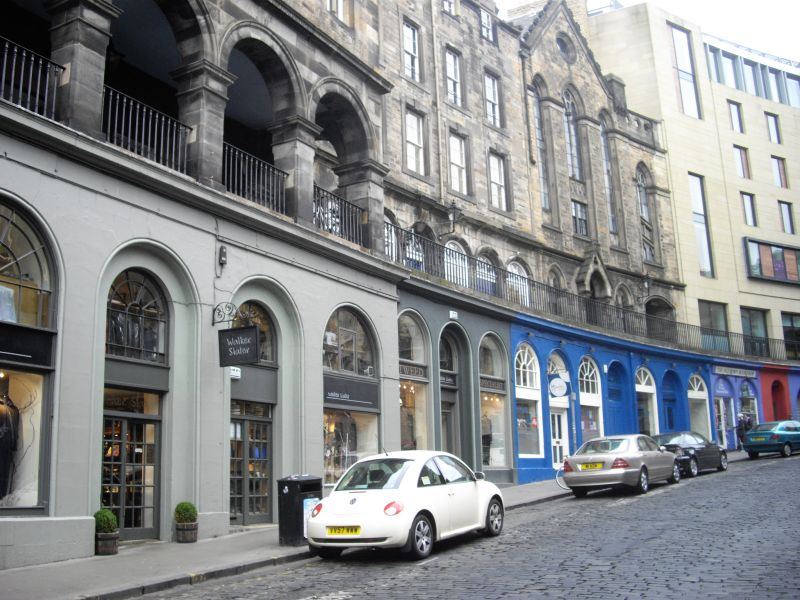 George Smith, circa 1843. 16-bay terrace of 2- and 3-bay shops, single storey to E, single storey and mezzanine to W, stepped to incline of street, with round-arched roll-moulded openings. Ashlar (painted). Pavement and railings of Victoria Terrace and arcade of Quaker Meeting House (separately listed) above. Base course, eaves cornice and blocking course. Roll-moulded surrounds to openings.

Victoria Street was part of Thomas Hamilton's plan for the new Southern and Western Approaches to the city. The plan was first proposed in an article in the Scots Magazine in 1817 (attributed to Hamilton) proposing the formation of 'a Communication between the N and S sides of the City of Edinburgh by means of a bridge entering the Lawnmarket nearly opposite Bank Street.' Hamilton and William Burn produced a 'Report relative to the proposed approaches' in 1824, of which a plan appeared in 'The Scotsman' (27th November 1824). Hamilton and Burn went to London in 1825 to gain support for an Act of Parliament, and the City Improvement Act was passed in 1827. Hamilton was appointed architect to the Commissioners for the Improvement Act, and carried out the 2 major town planning initiatives for which they were responsible - the W approach - King's Bridge and Johnstone Terrace, and the S approach - George IV Bridge, and the link to the Grassmarket - Victoria Street. Hamilton was replaced as architect to the Commissioners in 1834 by George Smith, and the buildings on the N side of Victoria Street were designed by Smith.