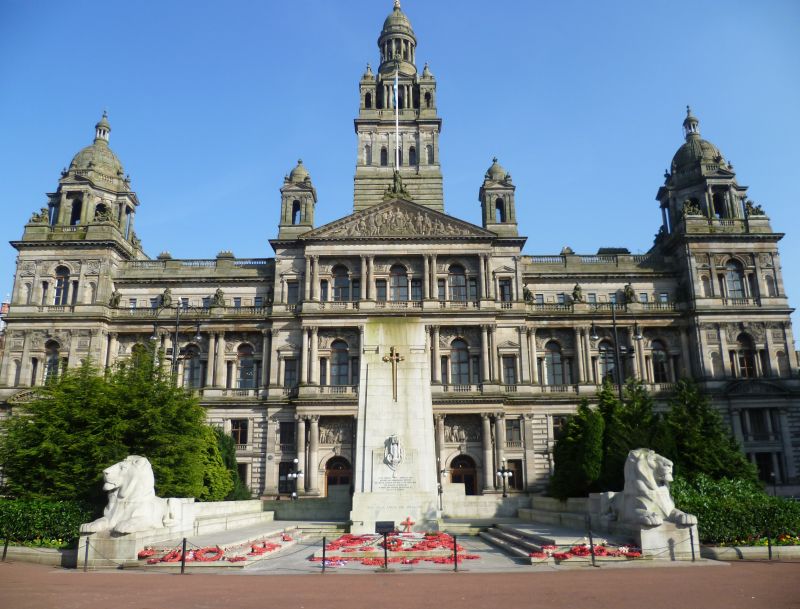 William Young, architect, 1882-1888, interior 1887-1890. Contractors, Morrison and Mason. Sculpture by John Mossman and George Lawson. An emphatic statement of Civic pride and prosperity the City Chambers occupies the whole block site between George Square and John Street, its 4 facades all equally opulent in detail. Their style is eclectic, mainly rich Italianate with Roman and Venetian references, and some Flemish overtones. In 1912 Watson and Salmond built a large extension to the E linked by pairs of archways across John Street (see separate item). Each elevation is faced in light polished ashlar now stonecleaned, Polmaise and Unmore stone fronting a fireproof framework

INTERIOR: richly and elaborately detailed in the finest materials. The main hall or loggia has ceramic mosaic floor and vaults. Large stone doorcases give access to lower rooms, those to the staircases flanked by Mossman caryatids. Most elaborate is the stair to the Banqueting Hall using polychrome Brescia and black Irish marble and Numidian mosaics to the vaults. The Banqueting Hall (to the N) is a barrel vaulted double height room, decoration designed by Leiper with murals by the "Glasgow Boys", Walton, Lavery, Henry and Roche. The decoration of the other rooms is hardly less opulent, the Council Chamber being the least ornate, with more sober mahogany panelling, a frieze of Tynecastle Tapestry and gilded ceiling with central dome.

Wylie and Lochead were responsible for much interior work, Stephen Adam for the glass. Sculptors were Mossman, Lawson, Farmer and Brindley, Charles Grassey and Edward Good. Ironwork was by George Adam.

A group with 20-40 Cochrane Street, extension to the City Chambers.