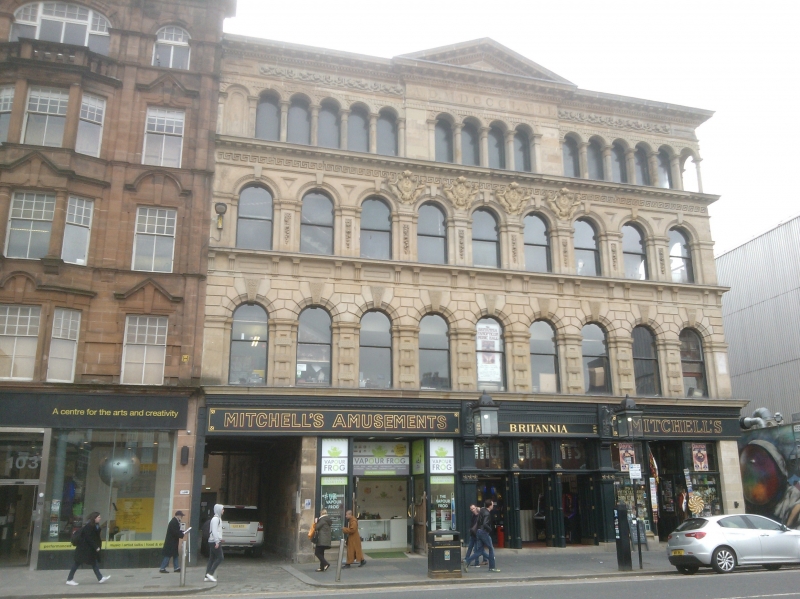 The former Britannia Music Hall is an exceptionally rare survival of a music hall and it is the earliest and sole surviving example of its type in Scotland and it has a claim to be the earliest in the UK. It has a high quality classical exterior with a profusion of detailing and it contains an important early music hall auditorium.

Dated 1857, it was speculatively built as warehousing and probably incorporated an earlier building on the site, but this proposed use was quickly abandoned and the architects Gildard & MacFarlane turned it into a music hall instead.

The first and second floors opened as a variety hall called Campbell's Music Salon in 1857. It was renamed the Britannia in 1859, and again in 1887 as Hubner's Animatograph. Rebuilt as the Panopticon 1906, the name changed to the Tron Cinema in 1922 before reverting to the Panopticon again until closure in 1938. It began showing moving pictures in August 1896 and was used for cine-variety from around 1910. Many famous performers have starred here, including Stan Laurel who made his debut here in 1906.

A great number of 19th century music halls were destroyed by fire. A combination of the extensive use of timber in the interiors as well as candlelight or gas lighting meant that they were susceptible.

Influxes of workers often living in poor conditions would find escapism in music halls with their mixture of songs, comedy and speciality acts such as acrobats or magicians. Often music halls were attached to a public house (there was a public house on the ground floor of the Britannia) and smoking and drinking during the performance was accepted unlike the separate bars found in established theatres.

The Britannia Panopticon Music Hall Trust is planning to restore and reopen the hall to the public.

References and Notes updated as part of Cinemas Thematic Study 2007-08.