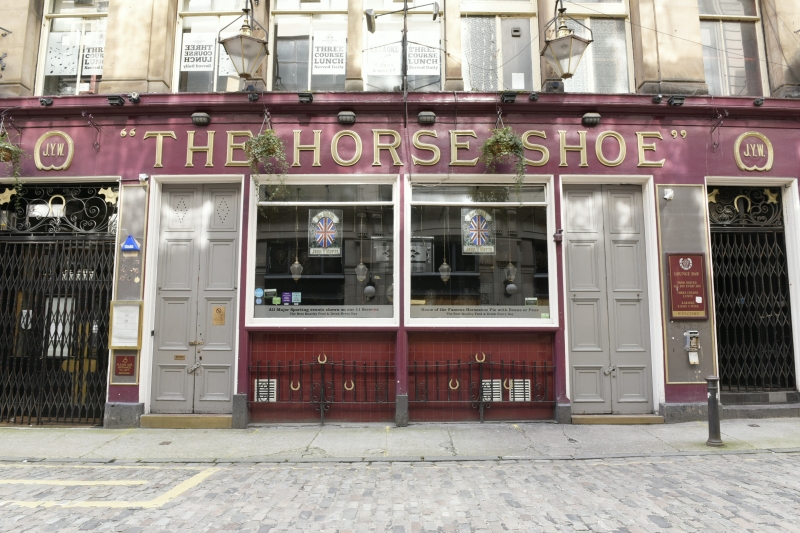 17-19 Drury Street is a fine Classical building with elements that indicate the influence of Alexander 'Greek' Thomson such as the deeply recessed windows sitting behind the main surface of the building and the incised Classical details. Though much simpler and with a more vertical emphasis than many of Thomson's designs there are distinct similarities between this building and Thomson's Dunlop Street warehouse of 1864-68. The building makes an important contribution to the streetscape of Drury Street and the adjacent Renfield Street and Mitchell Street.

The Horseshoe has an outstanding pub interior. It is highly elaborate with many fine details and has undergone little alteration since the early 20th century. At that time the pub gained its present appearance internally when the partitions between sitting rooms at the sides and the main bar area were removed. The counter was extended and gained the extra 'lobes' at the rear. One of the interesting features is the way in which the horseshoe theme has informed the design of so many of the fittings - the fireplaces, the columns above the gantry etc.

No architect has yet been identified for the Horseshoe. It has been suggested that the publican of the Horseshoe, John Scouller, who had purchased it in 1884, may have been responsible for the design, or at least for the idea of the Horseshoe theme as he was a keen equestrian himself. Two other pubs owned by Scouller, the Snaffle Bar in Howard Street and the Spur in Polmadie Street, had similar horse themes. It is possible that Scouller employed the architect Thomas Baird (1862-1953) to assist with the designs, as Baird designed Scouller's villa in Dalziel Drive about this time.

The Horseshoe is also historically important in the development of the Edwardian public house. From the time it was renovated in the 1880s it was considered to be a trail-blazer. The island bar layout became de rigeur in Glasgow for higher class pubs from the 1890s, enabling quick service and better supervision of customers. Many publicans from as far afield as Inverness and Aberdeen, visited it, took measurements and borrowed ideas from the design which they used to enhance their own pubs. By the early 1900s the pub had become something of a Glasgow institution and was as popular with prosperous merchants as with humble clerks. Category changed from B to A in 2008 as part of the Thematic Review of Heritage Pubs.