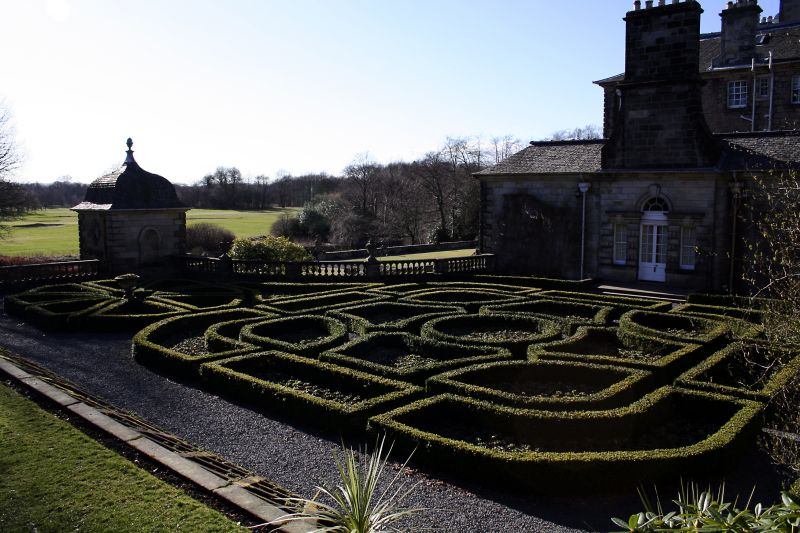 Pleasure gardens to SW of Pollok House extending up and
round hill, kitchen gardens on south-facing slope; area
bounded from parkland on the N by stone retaining wall
and on S by stables and driveway/retaining wall. Garden
area probably laid out at an early date, existing walls
built in stages, in rubble, ashlar and brick, and mostly
in 19th/early 20th century.
Eastmost wall, built of unsquared rubble, probably dated
from 18th century, garden gateway at N end re-uses
chamfered 17th century doorway, possibly from old Pollok
Castle; retaining wall at N end of kitchen garden built
of coursed and squared rubble; some brick walls, bricks
mostly narrow, rough and apparently locally-made, but
with bands of factory-produced bricks, 19th century in
appearance; dry-bridge, near-centre at garden entrance
from stables driveway at S - probably late 19th/early
20th century; retaining wall links stables to garden
pavilion at house. Another wall, of 19th century
appearance and extending eastwards from garden pavilion,
incorporates a long series of square rusticated piers
(like those in house forecourt) which look 18th century.
At the highest point of the pleasure garden, an
artificial motte with a tree on top, series steps
leading up slopes; carved and swagged vase, like those
on garden terrace of house, terminates one vista.